The Old Beechworth Gaol guided tour is much more than a walk through a heritage-listed building. It is the perfect way to explore the gaol and have history come alive. Beechworth Gaol is a time capsule that offers an authentic and educational look into the past. Visit the cells that housed notorious bushrangers, learn about convict life, and uncover some of the gaol’s darker history. Step inside and go back in time with an expert guide.

Beechworth is North East Victoria’s best-preserved gold rush town, leaving a legacy of colonial architecture that boasts 32 heritage-listed buildings. Old Beechworth Gaol is one of those buildings, and it is heritage-listed by the National Trust for its historical, architectural, and archeological significance to the state of Victoria.

A short drive from Albury (45 kilometres), Beechworth is in my backyard.

Don’t have a car? From Melbourne, Canberra, and Sydney, take a train to Wangaratta and then the bus to Beechworth on Wangaratta Coachlines.

Old Beechworth Gaol is located on the corner of Williams Street and Ford Street, Beechworth.

Our guided tour of old Beechworth Gaol started with a double vaccination status check. Walking through the main gates, the courtyard provided a venue for Daniel, our tour guide, to give us an overview of the history of Beechworth gaol. 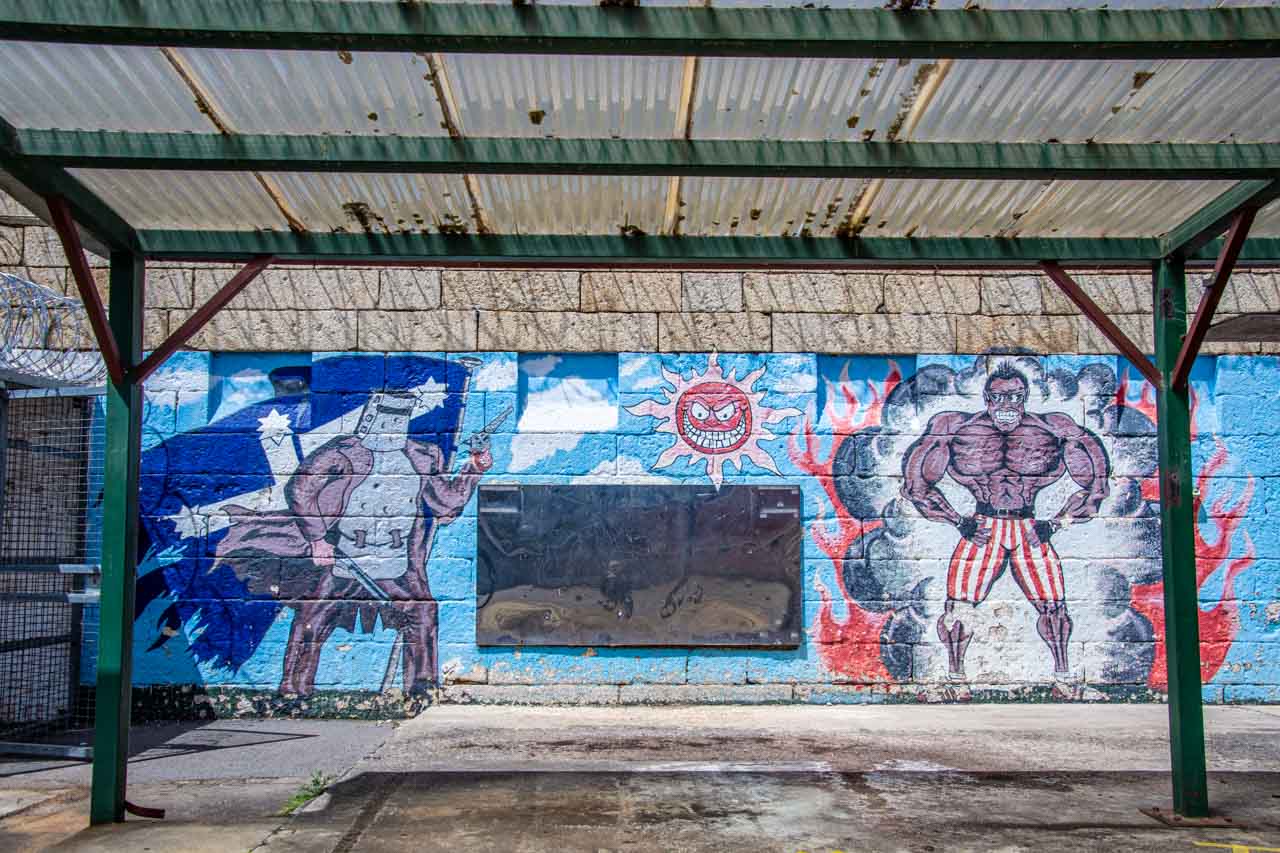 The mural in the hard labour yard painted by the inmate, Woodsie

Moving into the cell blocks was like entering a time capsule, where time has stood still since the prison’s closure in 2004. The feeling of being locked in time was confirmed by Daniel when he advised the cells have not been touched since 2004. 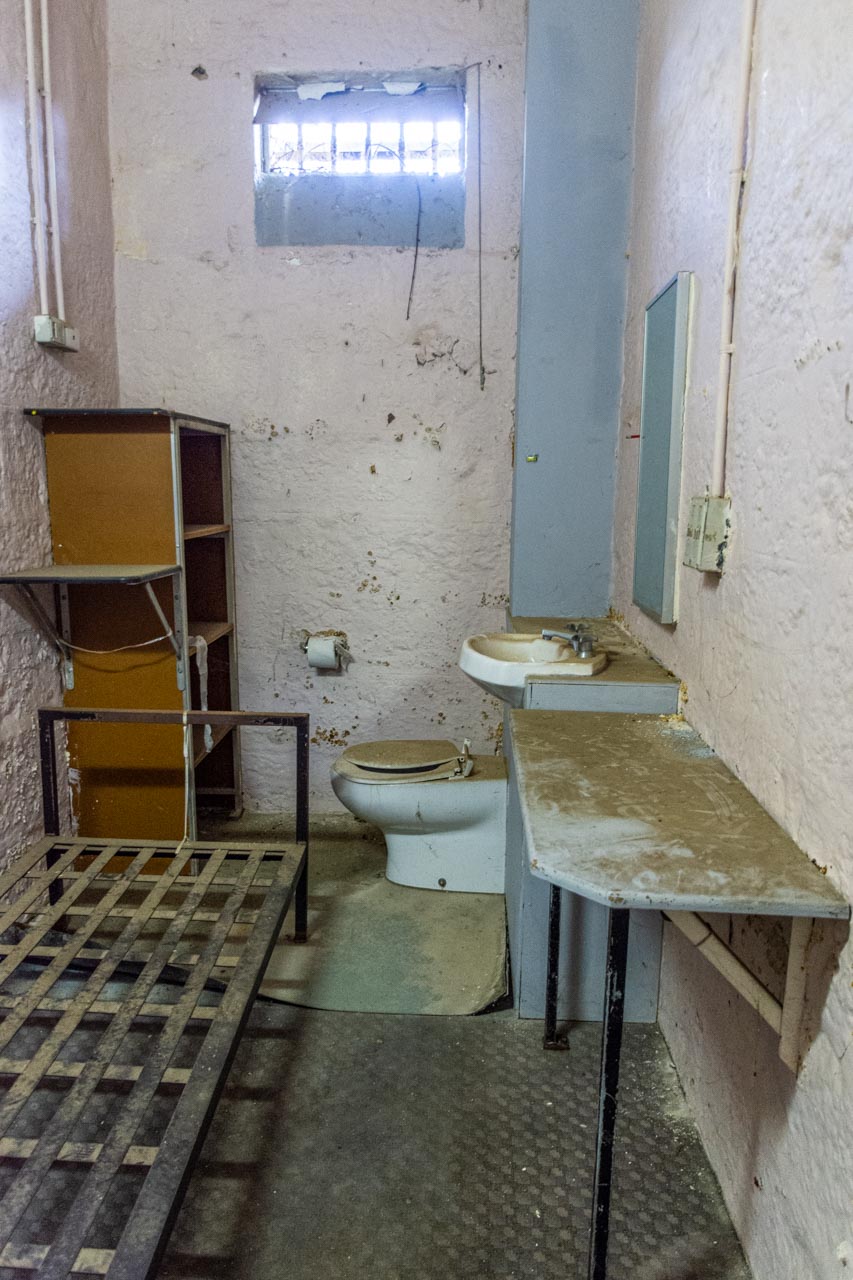 A cell on old Beechworth Gaol – a time capsule

In the men’s cellblock, the gallows with the hangman’s noose was visible on death row – the top floor of the men’s cellblock. Eight men were executed in Beechworth Gaol between 1865 and 1881, and they are buried in unmarked graves in the exercise yard against the western wall. 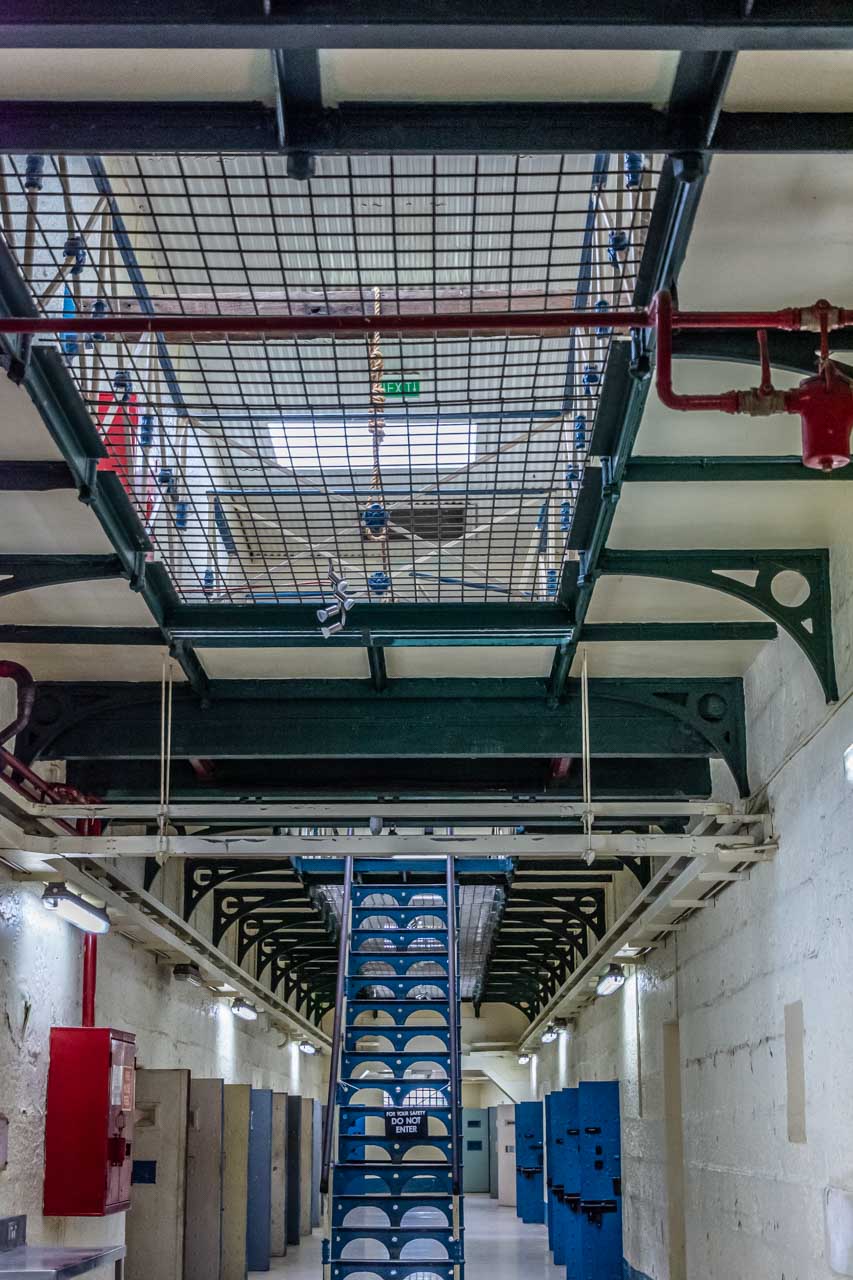 Daniel regaled us with stories of Ned Kelly’s misadventures (murder, assault, theft, and armed robbery) that landed him in Beechworth Gaol. Daniel was an entertaining storyteller. See below for details of who was Ned Kelly and his connection to Beechworth Gaol. 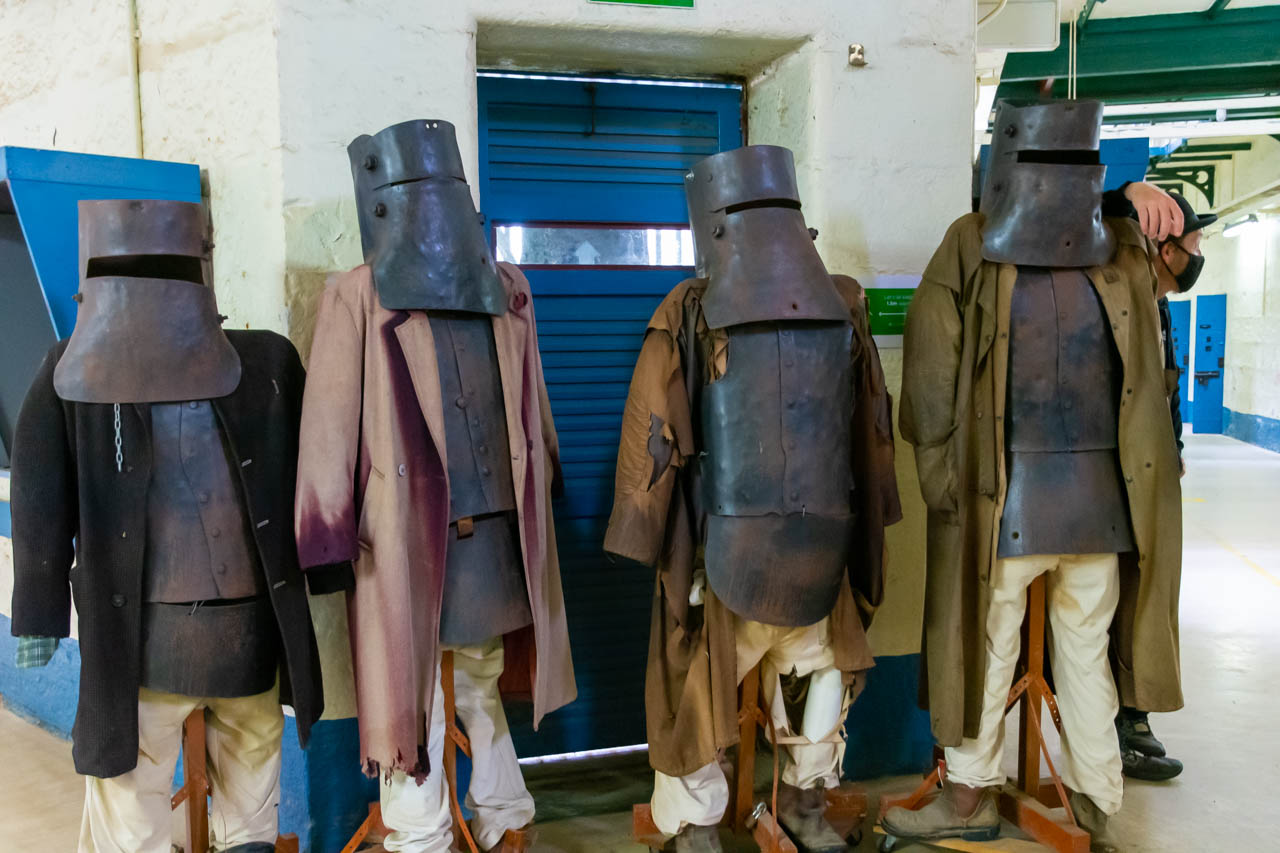 Effigies of Ned Kelly and the Kelly gang

In the women’s cellblock, cell 10 was the designated mother’s cell with its two doors. One door (the front door) led into the cellblock, and a guard could open the back door to allow the mother to let her children outside to play. Daniel explained that the children were not prisoners but were locked up with their mother. 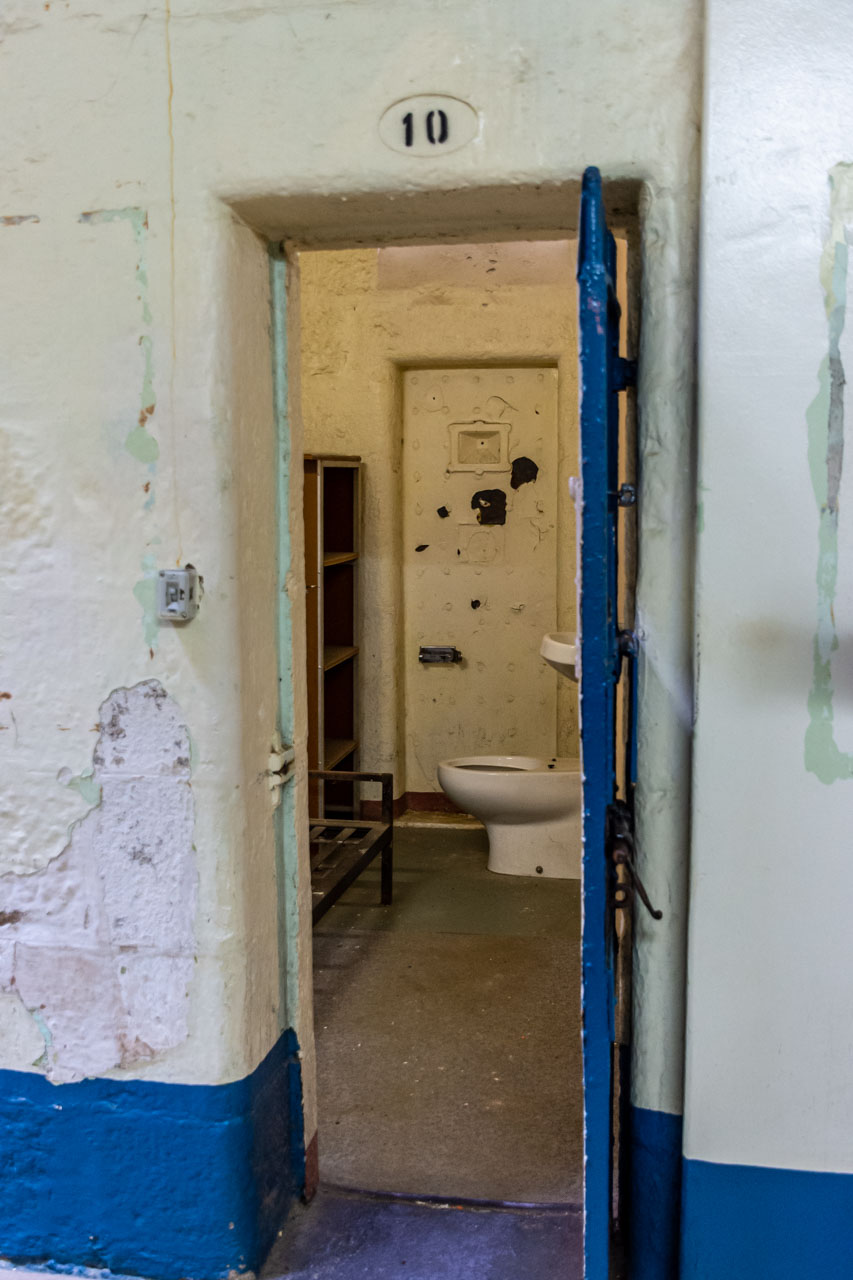 Cell 10 – the mother’s cell with its double doors

At the end of the women’s cellblock is the solitary confinement cell where a prisoner was locked in the cell 23 hours a day. The prisoner was allowed outside in a caged area for one hour a day. 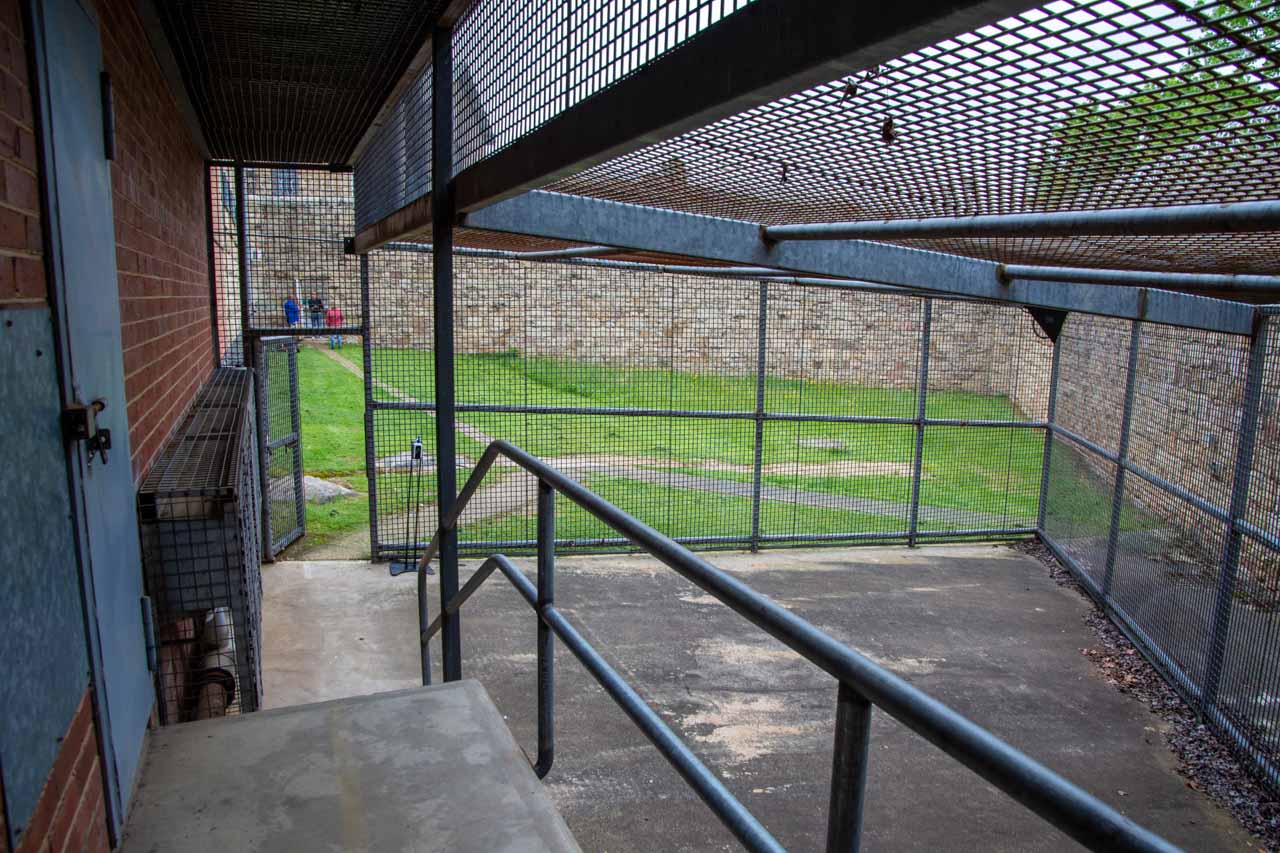 Our final tour stop was the exercise yard, the burial site of the executed men. An empty swimming pool dominates this lawned area. 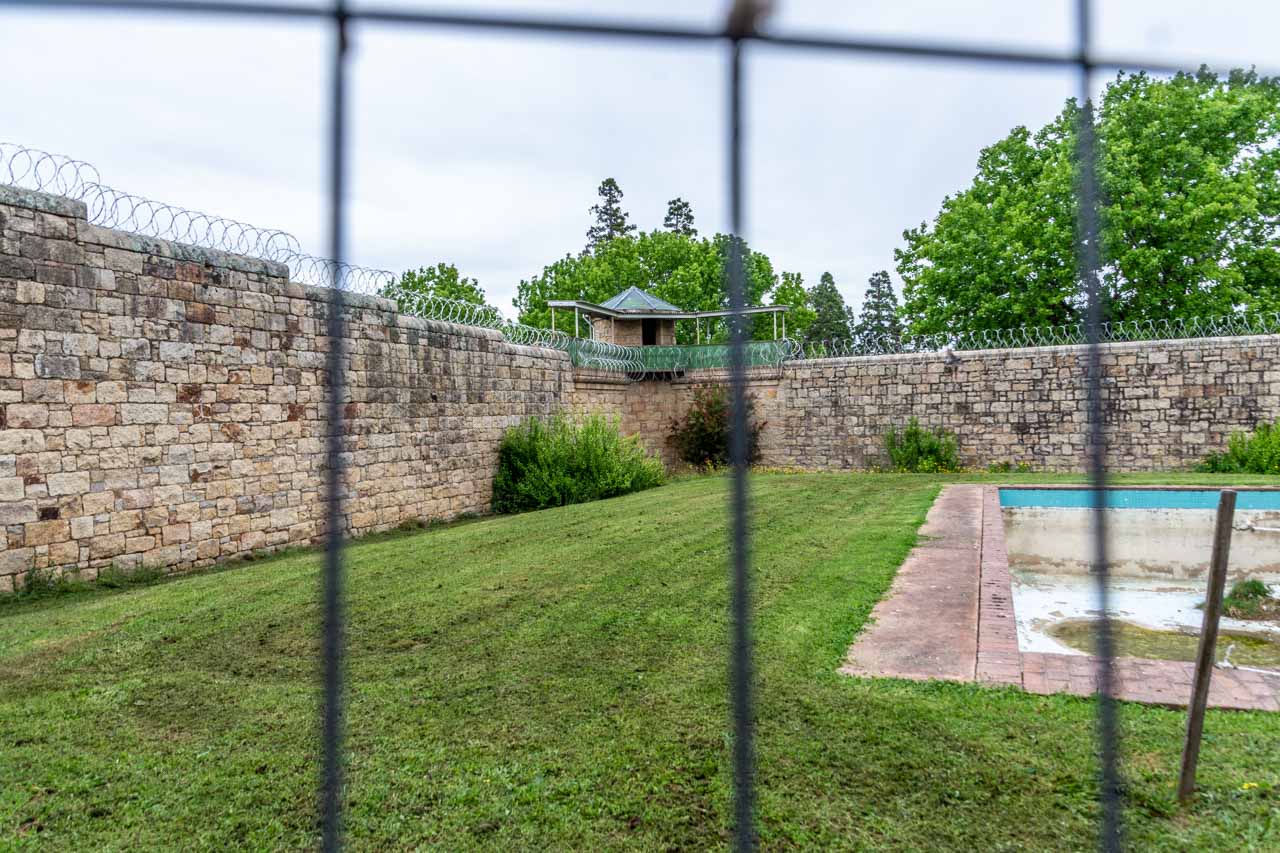 Ned Kelly was Australia’s most notorious bushranger and known for wearing a suit of iron armour during his final shootout with police. He was immortalised in the 1970 Ned Kelly movie starring Mick Jagger in the title role.

For those not familiar with Australian colonial history, escaped convicts who used the bush to hide from authorities were the original bushrangers. By the 1820s, the term had evolved to refer to those who took up armed robbery as a way of life, using the bush as their base.

Ned Kelly first became intimately acquainted with the inside of Beechworth Gaol at the age of about 13. Over the ensuing years, he became more familiar with the gaol on at least two other occasions.

Daniel was a wealth of information about Ned Kelly and his time spent in Beechworth Gaol. He held our undivided attention when telling of Ned’s imprisonment for lewd behaviour and assault when he was 16 years old. According to Daniel, Ned sent a package to a lady containing a man’s testicles and later assaulted her husband. There is great truth in the story as Ned did indeed send testicles to the lady. However, depending on your resource will determine the nature of the testicles. A man’s testicles, a calf’s testicles, two calves’ testicles – believe what you will. I suspect the story has grown legs.

For the lewd behaviour and assault crimes, Ned Kelly received 6 or 8 months (once again, depending on your resource) imprisonment in Beechworth Gaol.

Whether you do the old Beechworth Gaol guided tour in the morning or afternoon, you must eat in Beechworth.

You are spoiled for choice for places to eat in Beechworth. I have eaten at several places and never had a bad meal.

On the day of my old Beechworth Goal tour, I ate at the Beechworth Pantry Gourmet Delicatessen & Coffee Shop on Ford Street. I ordered the Asparagus, Leek and Cheese Quiche with apple and Pear Salad and couldn’t resist the Hazelnut Meringue with Berries and Cream. I left the cafe very satisfied and with bars of fruit nougat in hand for later enjoyment.

If you plan to visit Beechworth, do yourself a favour and take a step back in time with a guided tour of old Beechworth Gaol. The tour provides all ages with an authentic and educational experience in which local, expert guides bring a dark history to life. It is a unique experience not to be missed and highly recommended. 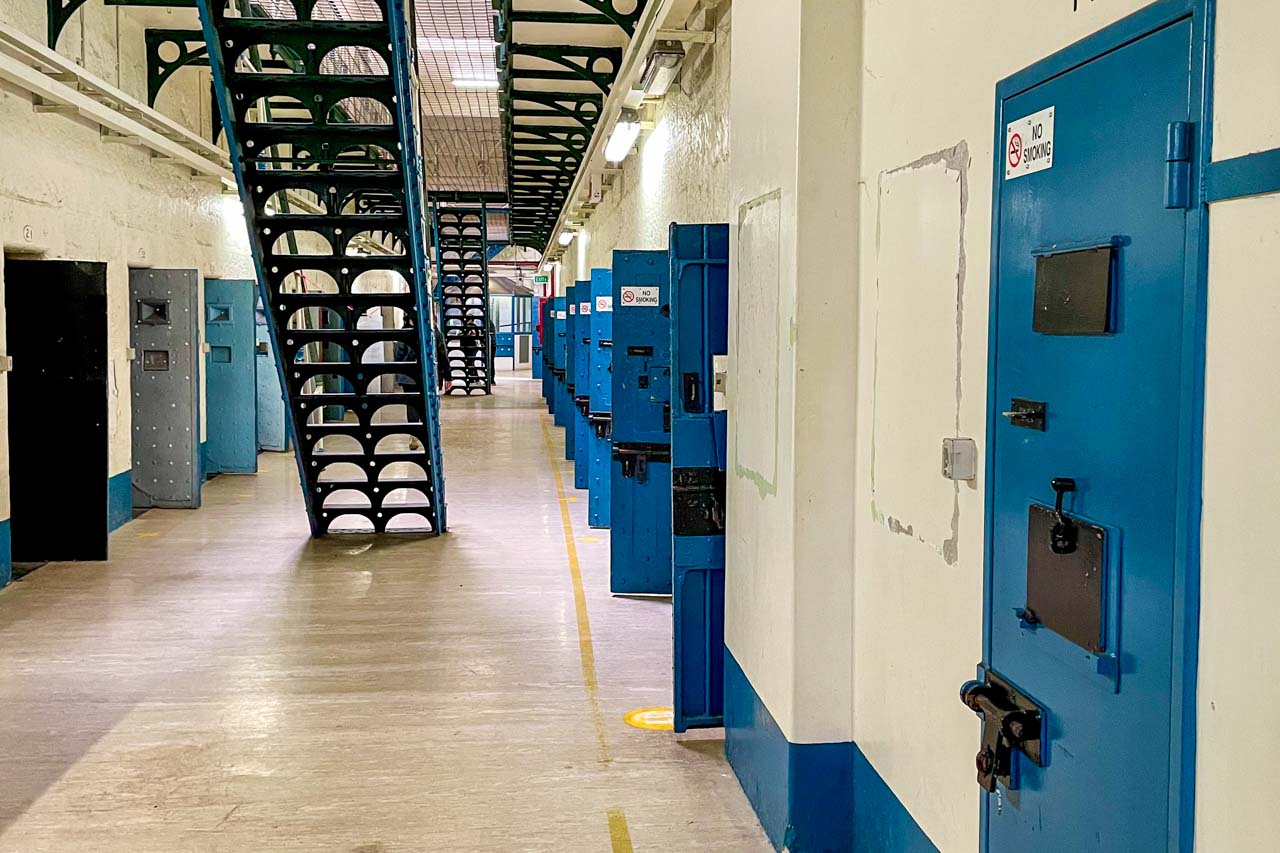 Please leave a comment below to share your thoughts. The only other prison tour I have taken was to Alcatraz when I was visiting San Francisco. Where have you taken a prison tour?

World Weather Forecast – Know Before You Plan, Pack, and Go.   The weather plays a crucial role in your enjoyment of your trip. Planning is essential and knowing the…

World Weather Forecast – Know Before You Plan, Pack, and Go.

The weather plays a crucial role in your enjoyment of your trip. Planning is essential and knowing the city weather forecasts informs your trip planning and packing.

Do you want to avoid, as much as possible, torrential downpours like this in southern India (below)? Read on to learn how. 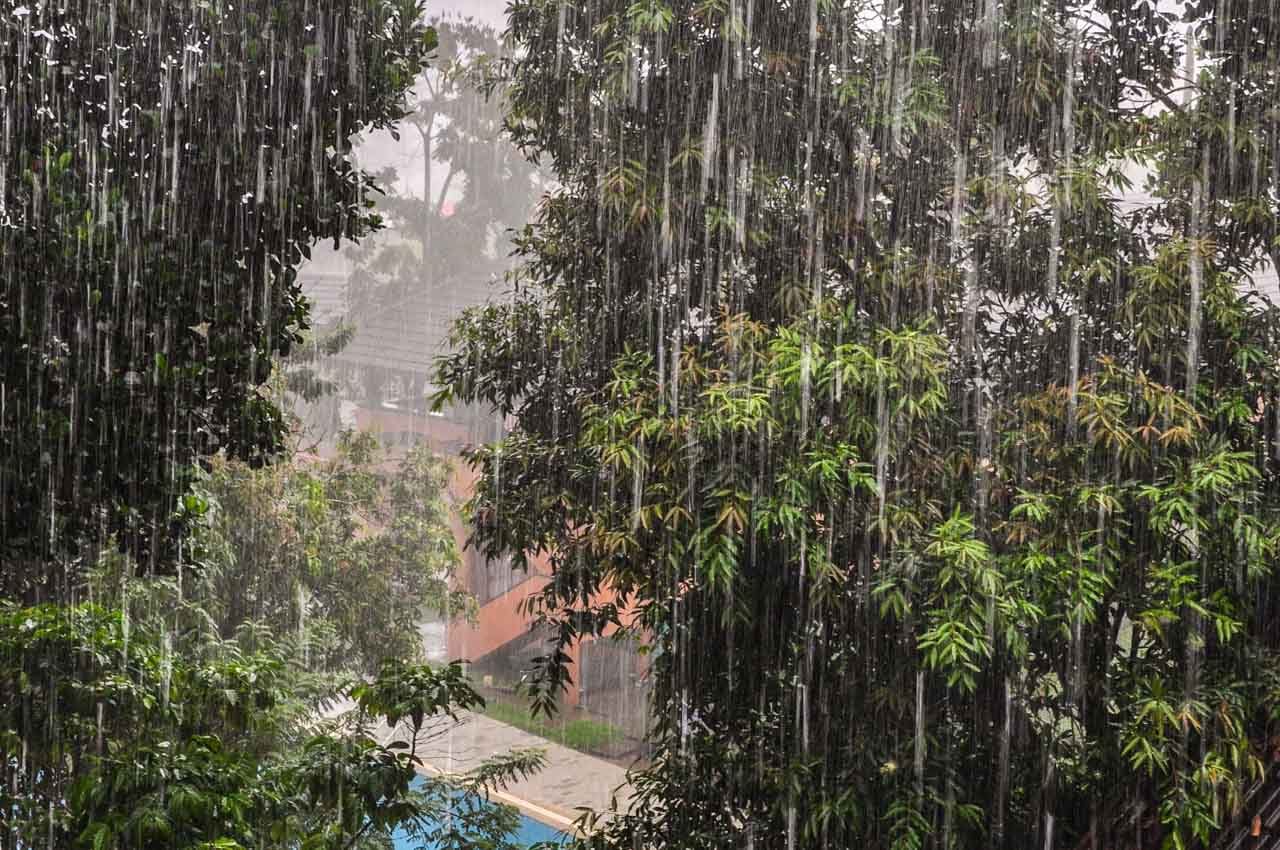 Are you planning a trip but unsure what to pack because you don’t know the expected weather?

Do you ask yourself which month will give you the best weather for that holiday at the beach?

Do you want to go to Asia, missing the monsoon season, but don’t know which months have the highest rainfall?

I learned the hard way about this last question, travelling to Vietnam on two occasions in November and October, respectively. Vietnam’s monsoon season is May to November. On both trips, I found myself in Hoi An walking the streets in calf-deep water because the Thu Bon River had broken its banks. I’m obviously a slow learner! My third trip to Vietnam was at the end of December. No rain! 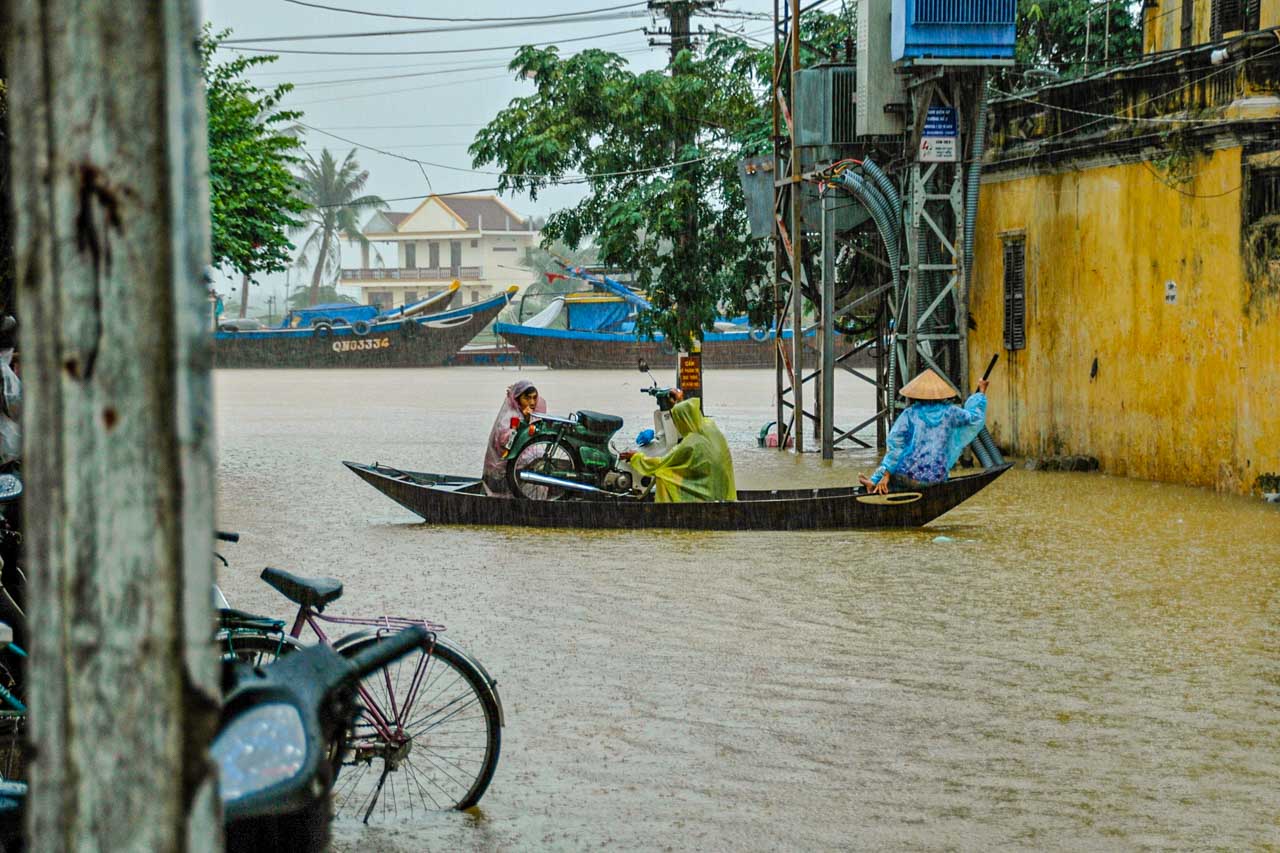 My go-to resource to answer these and similar questions is the World Meteorological Organisation’s (WMO) World Weather Information Service.

Here you can access reliable weather forecasts and conditions for most world cities. Specifically, you will find: 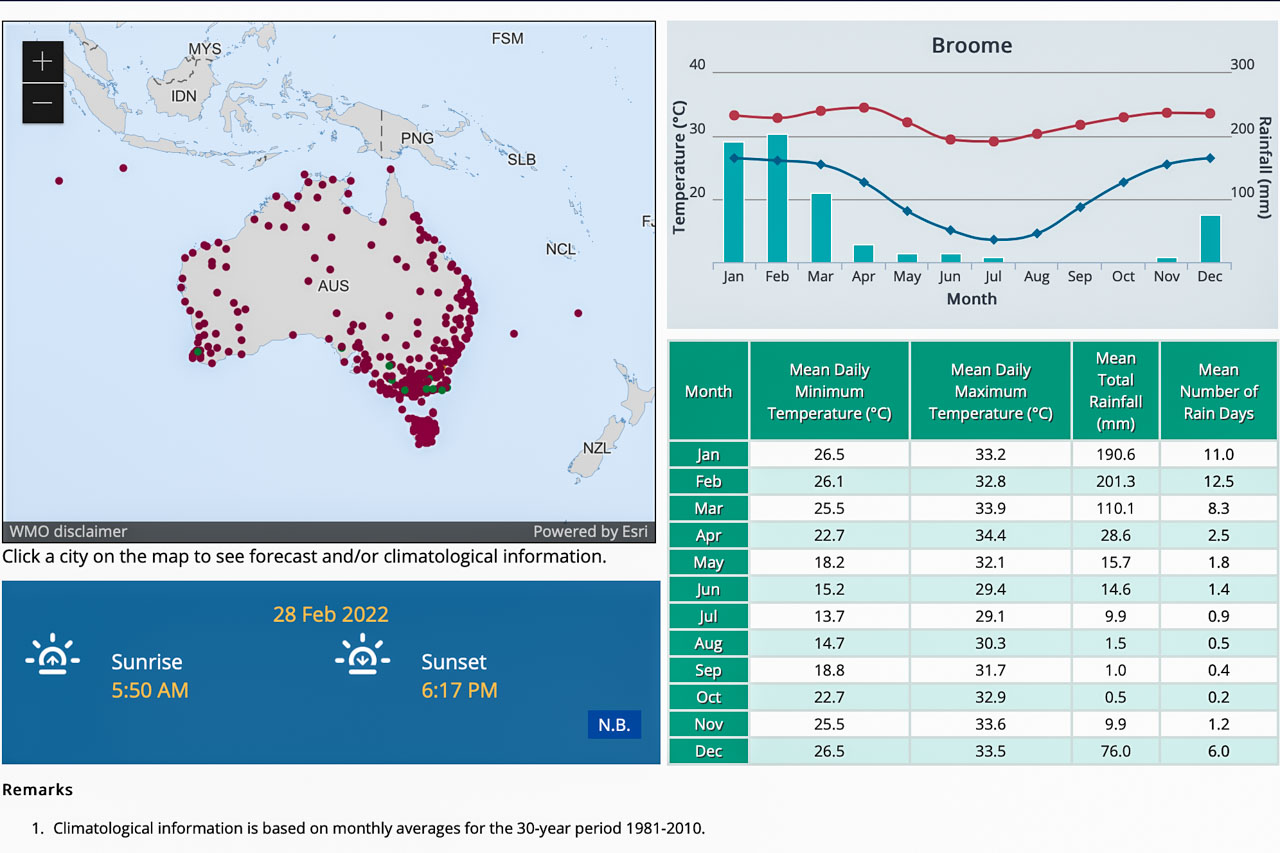 I am someone who loves the heat and hates the cold and rain. As such, my trip planning revolves around escaping my hometown’s cold, wet winter and seeking holidays in hot, dry places. The WMO’s long-range city weather forecast is a great asset in my decision making.

Having decided where and when I am going, the WMO’s World Weather Information Service then informs me as to what I pack, depending on the average temperature (minimum and maximum) and rainfall (how much and how often). I like to pack light, so I will not take a coat if the temperature at my destination does not drop below 25 degrees Celsius day or night. If the long-range forecast for the months I am travelling predicts no rain, I won’t take a rain jacket but will take a travel umbrella as mother nature can be a fickle mistress.

The “MyWorldWeather” is the mobile application of the World Weather Information Service and is available from the App Store and Google Play.

On a final note, I would like to leave you with the following image. 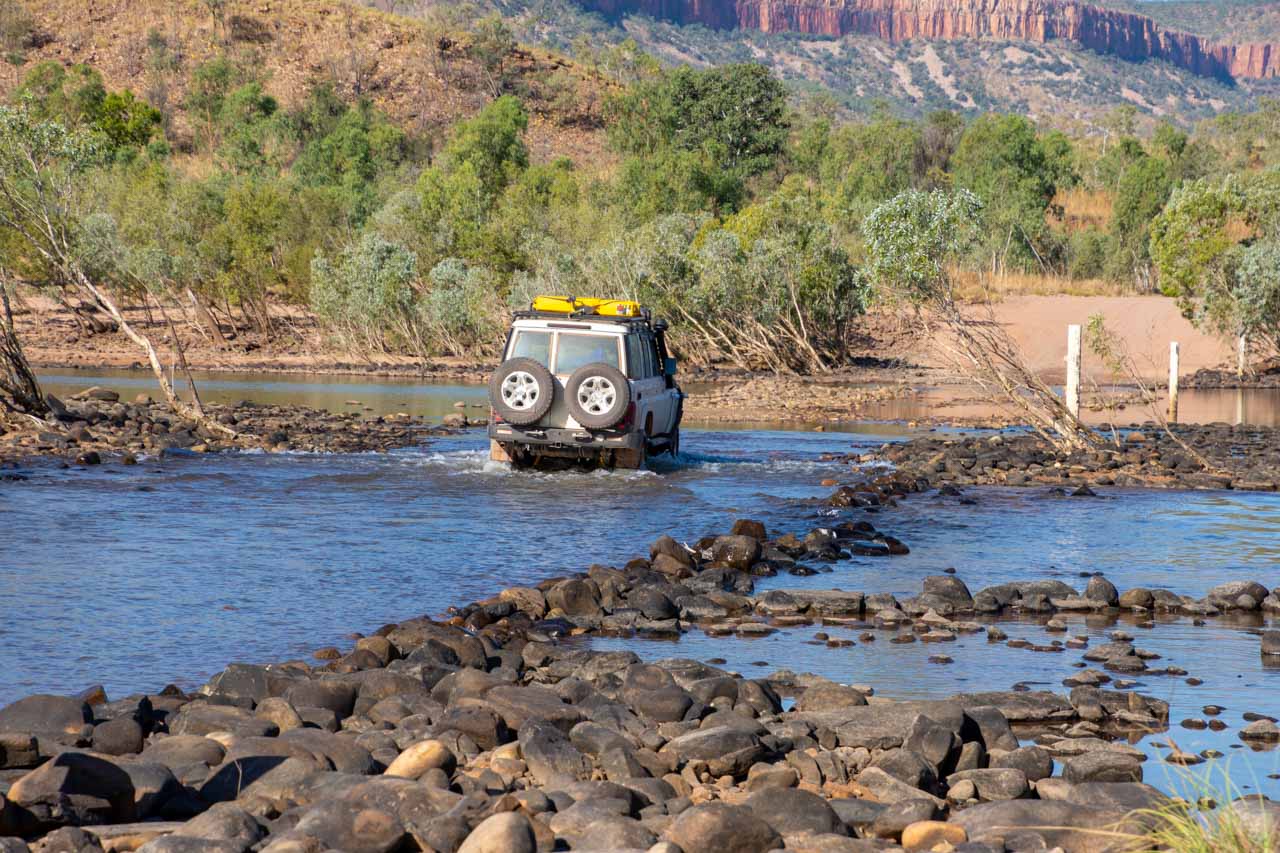 It’s the dry season in the Kimberley, Western Australia, and this car (above) crosses the flooded Pentecost River. During the wet season, the river and much of the Kimberley is impassable.

Editor’s Note: This blog post was originally published in January 2019 and has been updated for accuracy and comprehensiveness.

END_OF_DOCUMENT_TOKEN_TO_BE_REPLACED
No Comments on PLANNING A TRIP? GET THE BEST WORLD LONG RANGE CITY WEATHER FORECASTS [2022 UPDATED]
Joanna Rath
With a passion for photography and writing, Joanna has been solo travelling across the globe for the last 25 years. Follow her journeys, read her reviews and discover places to see on justme.travel