HOW TO SEE HORIZONTAL FALLS AND EPIC TIDES, AUSTRALIA 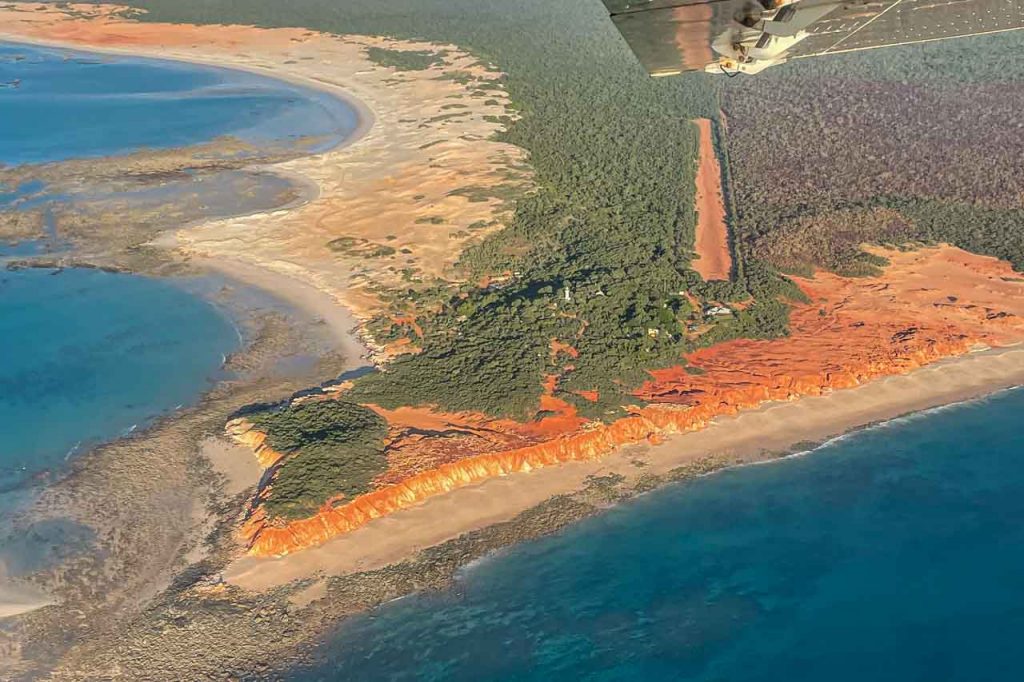 Northern Western Australia has some of the best unique experiences you will find in Australia. Air Kimberley’s Cygnet Bay Explorer full-day tour covers several bucket list activities in the Kimberley region. Be prepared for a scenic flight over the Horizontal Waterfalls and the stunning Buccaneer Archipelago, a visit to a hatchery managed by the Bardi-Jawi people, a pearling industry discovery tour and a fast boat cruise amongst giant whirlpools and standing tidal waves in the world’s largest tropical tides. So, where am I taking you? Read on to discover and learn more about your next Australian adventure.

Over the past 12 months, I have tried twice to join a tour over and through Horizontal Falls in Western Australia. However, on both occasions, the company cancelled the tour. The first cancellation in 2021 was because the seaplanes could not take off due to low cloud cover. The second cancellation (June 2022) occurred when a fast boat had an accident going through the Horizontal Waterfalls, and all fast boat tours through the falls were temporarily suspended.

When I recently found myself in Broome again, and my second-attempted pre-booked Horizontal Falls tour was cancelled, I was resigned to my disappointment. However, one day nosing around the resort lobby, I came across an Air Kimberley brochure. I discovered they did a similar full-day tour that included a flyover of the Horizontal Falls and a sea safari, not through Horizontal Falls, as I had wanted, but out to the giant tides off the Kimberley coast.

The Air Kimberley tour cost, at $985.00, was slightly less than what I was to be refunded from the cancelled tour. I figured, what did I have to lose? And I wasn’t returning to Broome for a third attempt at the Horizontal Falls tour.

So, what did I find in that Air Kimberley brochure? Before I answer that question, you probably wonder why seeing Horizontal Falls was so important to me.

Last year, when organising my first ever trip to the Kimberley in northern Western Australia, Horizontal Falls was on my must-see list for several reasons.

Did my flight over Horizontal Falls meet all my expectations? You will have to read on to find out.

And now, back to my question about what I found in the Air Kimberley brochure.

While you can check out the details of this tour for yourself by clicking on the link, there were two very different events I was eager to experience – the scenic flight over Horizontal Falls and the sea safari out to the giant whirlpools. But I am getting ahead of myself. What did the tour entail?

I was picked up from my accommodation at 6.30 am and driven to Broome International Airport, where Air Kimberley is based. Four other people (two couples) joined me on the tour. After our flight safety briefing, we boarded a small aircraft (eight-seater, including the pilot) for the 2-hour flight up the Kimberley coast for our flight over the stunning Buccaneer Archipelago and Horizontal Falls.

The Buccaneer Archipelago is a group of 1,000 small islands covering 50 square kilometres, located at the head of King Sound near the Kimberley town of Derby.

The archipelago is a magnificent raw landscape that you can only truly appreciate from the air. While boat tours around the islands offer visits to the beautiful coves and beaches, you would not get the perspective given by a scenic flight of the vastness of all those islands that seem to go on forever.

I must admit, I was underwhelmed with Horizontal Falls. I had read so much about the power of the tides running between the cliffs, causing the water to appear like a horizontal waterfall, but ‘power’ was not evident from the plane. Instead, what I saw was more like Class 1 or 2 rapids.

I suspect the wonder of Horizontal Falls and the power of the tides are best experienced from a fast boat through the waterfalls rather than a scenic flyover.

When we landed at the Ardyaloon Trochus Hatchery & Aquaculture Centre, run by the Bardi-Jawi people on One Arm Point, I asked the pilot if we were not allowed to fly lower over Horizontal Falls. I thought lower would give a better ‘feel’ for the powerful tides. Apparently, there is a height pecking order, with helicopters flying at the lowest altitude, seaplanes next level up, and light aircraft (our plane) flying the highest.

When I got home and reviewed my photos more closely, I felt the image below revealed the power of the running tide more clearly than my eyes could discern. What do you think? 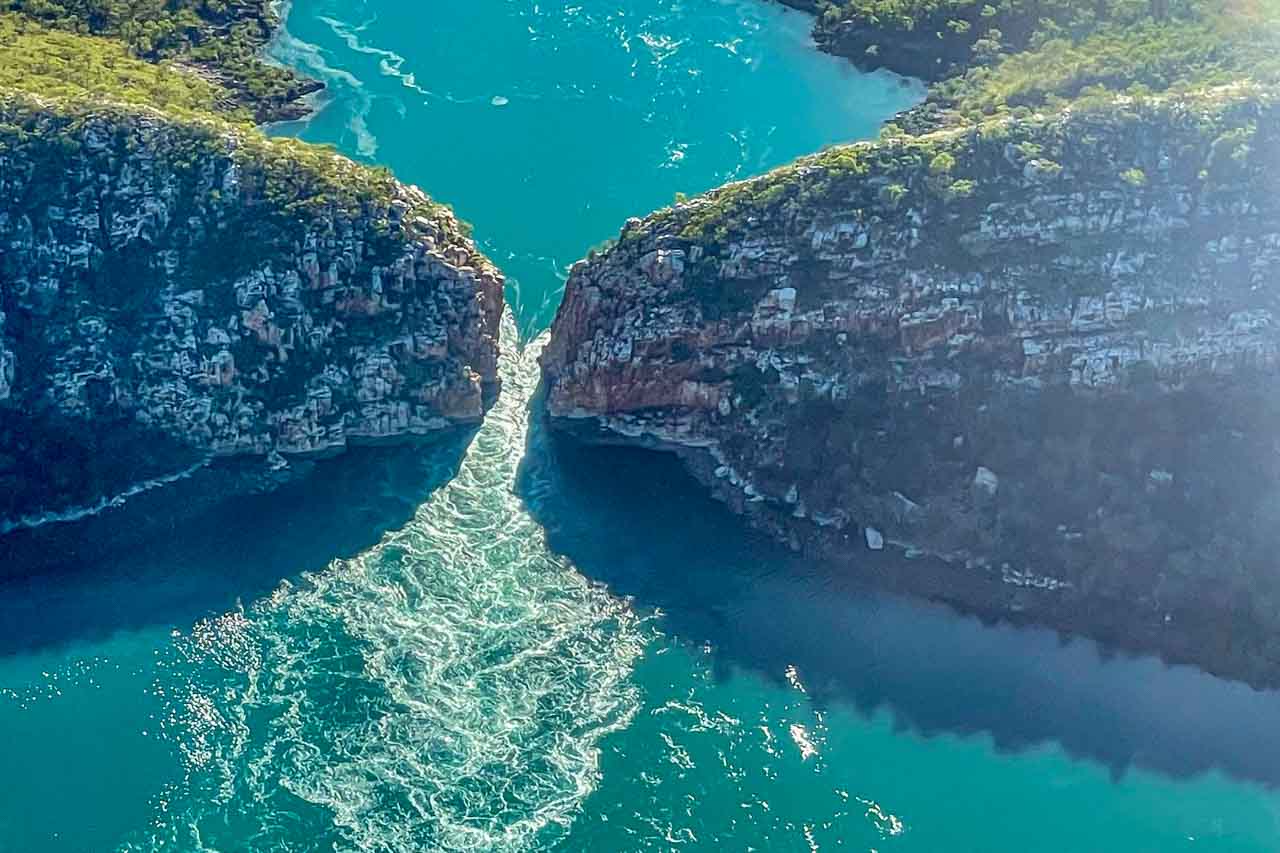 Can you ‘feel’ the power of the Horizontal Falls in this photo?

I had joined a guided tour of Ardyaloon Trochus Hatchery on a previous visit to Broome in 2021. However, on this occasion, morning tea of fruit salad, cake, and juice was provided by Air Kimberley.

From Long Arm Point, it was a short, six-minute flight to Cygnet Bay Pearl Farm on the tip of the Dampier Peninsula, where the activities included the Pearl Discovery Tour and a Sea Safari. At Cygnet Bay Pearl Farm, Air Kimberley’s involvement was limited to getting us to the pearl farm, seeing we joined the Pearl Discovery Tour, paying for lunch, ensuring we were on the fast boat for the Sea Safari, and flying us back to Broome.

My previous visit to Broome in 2021 included the Pearl Farm Discovery Tour at the family-owned Cygnet Bay Pearl Farm. However, I continue to be fascinated by the history of pearling in the Kimberley.

Reading tip: If you are interested in learning more about a significant chapter in the Kimberley’s pearling industry, I recommend reading The White Divers of Broome by John Bailey, telling the true story of a fatal experiment.

The tour commenced with an information session on the history of Cygnet Bay Pearl Farm and the pearling industry in what appropriately appeared to be an old school classroom. A live pearl harvest followed the history lesson. 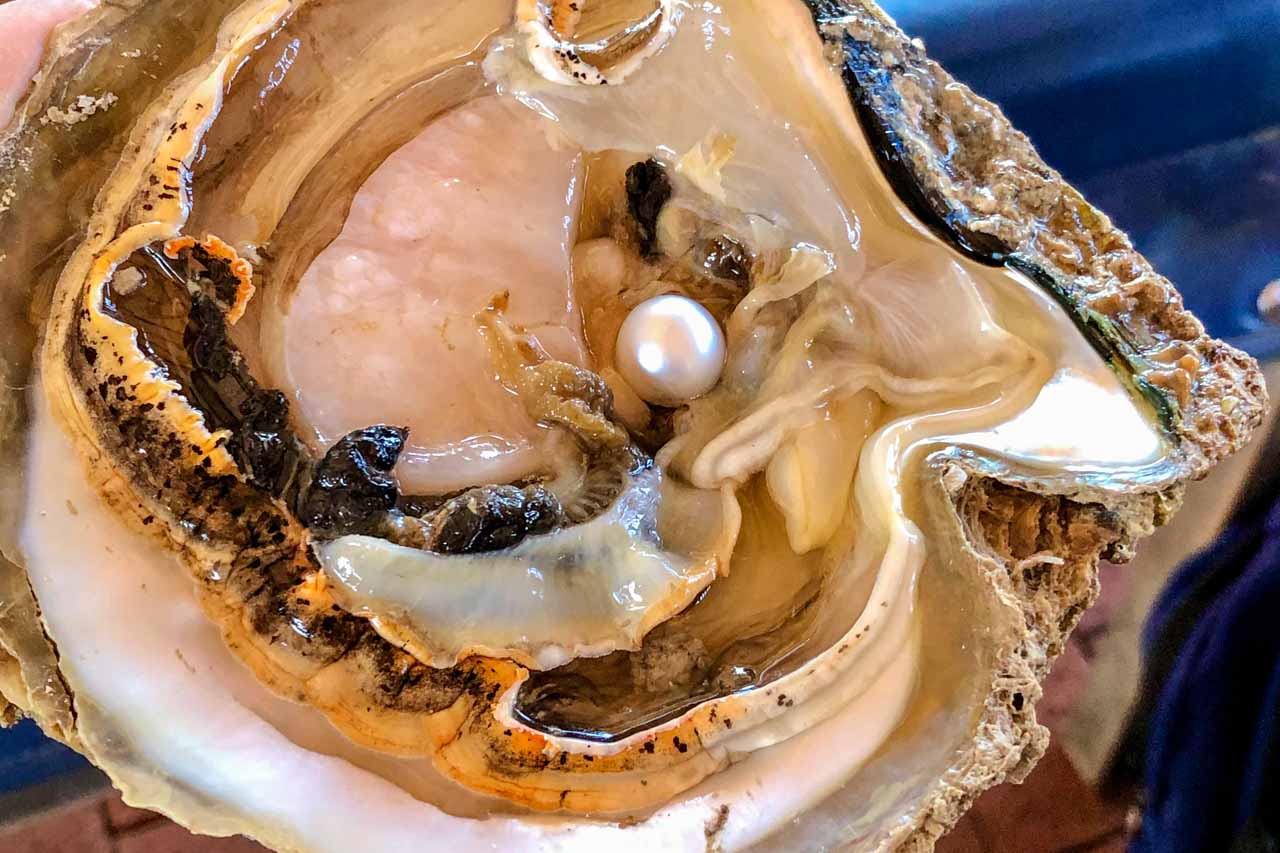 The tour concluded with an in-depth session on how pearls are graded.

The Pearl Farm Discovery tour was followed by lunch at the onsite restaurant.

Twice I lunched at the Cygnet Bay Homestead Restaurant with a tour group when the set menu was seafood. On both occasions, Cygnet Bay Pearl Farm was advised of my seafood allergy, and, on both occasions, this information seems to have been lost in translation. The outcome was eating a meal after everyone else had finished because they had nothing prepared for me. I found the restaurant’s forgetfulness disappointing.

After lunch, we climbed aboard the fast boat for our Giant Tides Sea Safari. During this cruise, we would “feel the power of the world’s largest tropical tides with giant whirlpools and standing waves” created by millions of tonnes of water squeezing between the rocky islands of the Buccaneer Archipelago.

“Feel the power of the world’s largest tropical tides as you cruise amongst the giant whirlpools and standing tidal waves. Venture into Escape Passage, recently described by scientists as the fastest ocean currents in the world!

The tides on this section of the Kimberley Coast are particularly large due to the area’s geography. When the sun and moon align on a spring tide, the ocean is pulled towards the north-west of WA and Indonesia, gathering speed as it reaches the shallow continental shelf and bottlenecking as it passes between Australia and Indonesia, creating the exhilarating whirlpools and standing waves we see on the tour.”

My photos can’t express the sense of adventure experienced and don’t do justice to all you see. The whirlpools are probably best viewed from the air.

The Sea Safari was an experience I find difficult to describe as there just don’t seem to be the right words to express how I felt as we powered through the whirlpools and standing waves created by the forceful tides. But let me try. It was a thrilling, exhilarating, exciting, fun, and awesome adventure. To best sum up my feelings, I was disappointed when it was time to return to land. I immediately wanted to go back out again, but there was a plane waiting for me to take me back to Broome.

The flight along the Kimberley coast back to Broome took us over the magnificent red cliffs of James Price Point, famous for its 130-million-year-old dinosaur footprints (but that’s another trip). 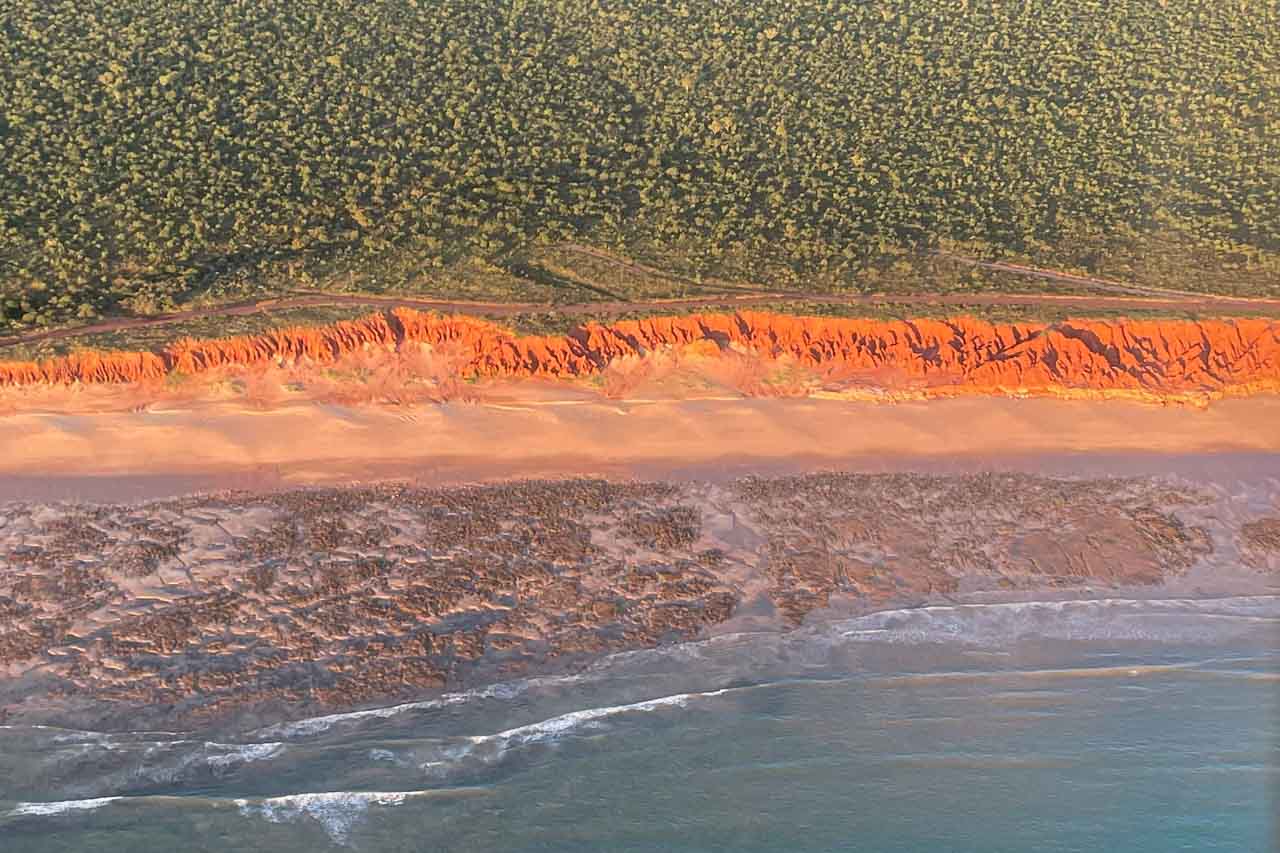 It was a long (approximately 11 hours), enjoyable, satisfying, and exhilarating day providing several unique experiences and so worth it. I can not fault Air Kimberley’s relaxed professionalism, guiding, and communication.

The tour was an excellent itinerary, well organised, kept on time without feeling rushed, and value for money. Without hesitation, I recommend Air Kimberley to readers.

Before our transfer back to our respective hotels, Air Kimberley presented each passenger with special gifts as mementos of our Kimberley adventure – a tour photo, a souvenir Passport & Tour Map to the Kimberley, an Air Kimberley stubby cooler, and a complimentary beer voucher from Matso’s Brewery in Broome. I am not letting out any secrets here, as Air Kimberley lists the gifts on their website.

In this post, I have shared my experience of Air Kimberley’s full-day Cygnet Bay Explorer tour up the Kimberley coast over the Horizontal Falls and 1,000-islands Buccaneer Archipelago and onward to a fantastic sea safari adventure in the world’s largest tropical tides. It was a chance meeting with a brochure that brought me to Air Kimberley – one that was to my benefit and yours.

Please leave a comment below to share your thoughts. Does Horizontal Falls deserve Sir David Attenborough’s description of “one of the greatest natural wonders of the world”? 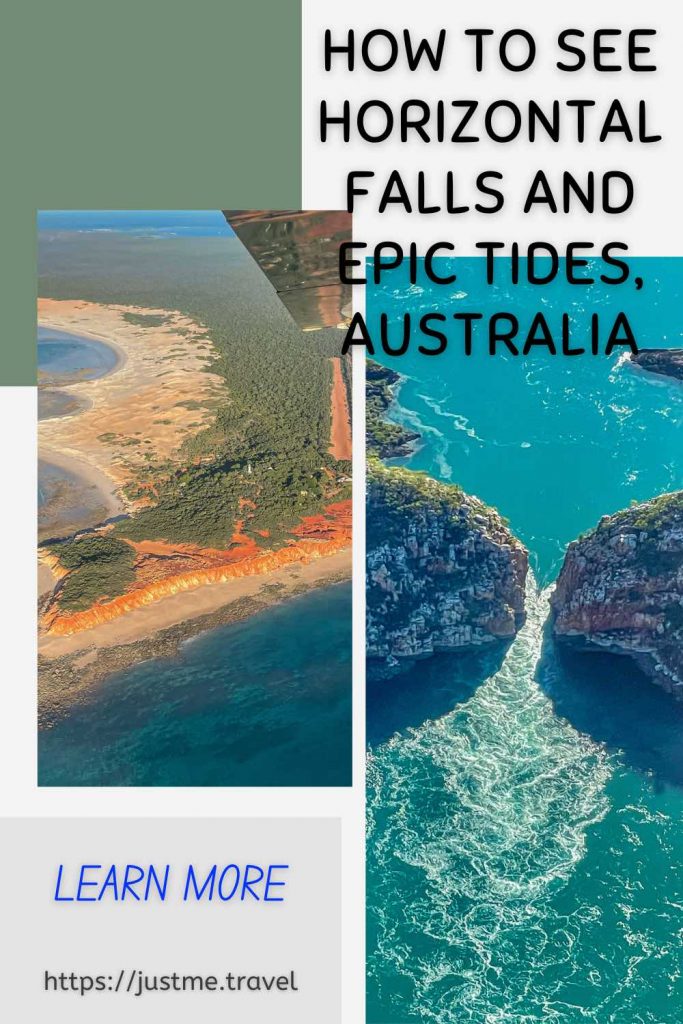 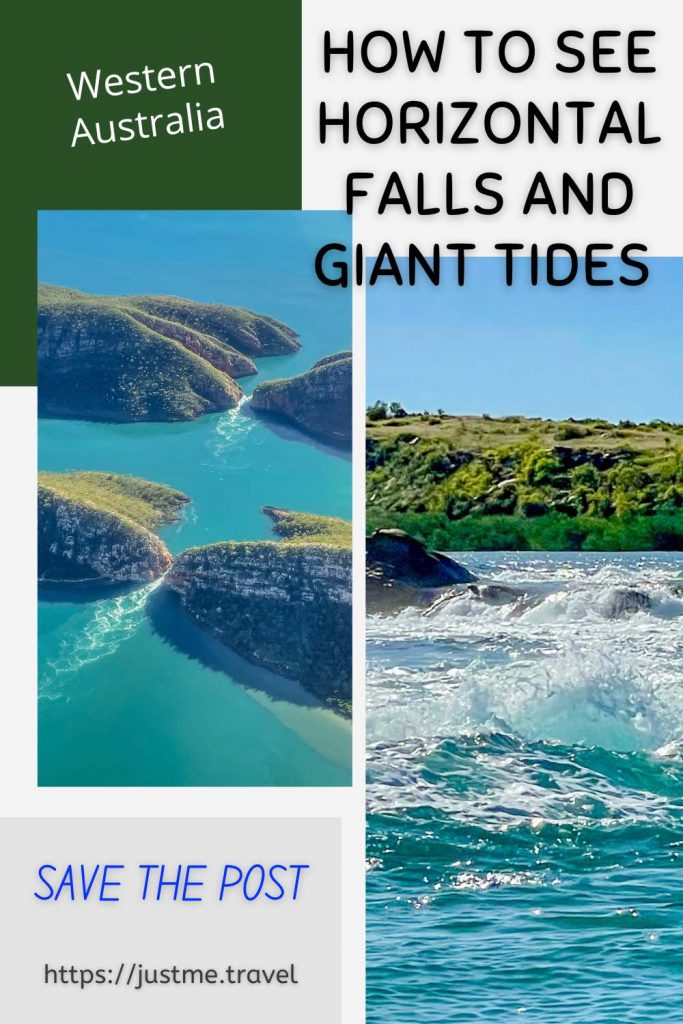 Are you looking for more ideas on destination Western Australia? Then don’t miss these posts:

23 GREAT PHOTO SPOTS ON THE ROAD FROM PERTH TO BROOME, AUSTRALIA

7 TOP DAY TRIPS AND THINGS TO DO IN AND FROM PERTH, AUSTRALIA

SEE 7 BEAUTIFUL GORGES IN THE KIMBERLEY – the ultimate guide

THE ULTIMATE GUIDE TO 6 SAFE SWIMMING HOLES IN THE KIMBERLEY, AUSTRALIA

23 GREAT PHOTO SPOTS ON THE ROAD FROM PERTH TO BROOME, AUSTRALIA