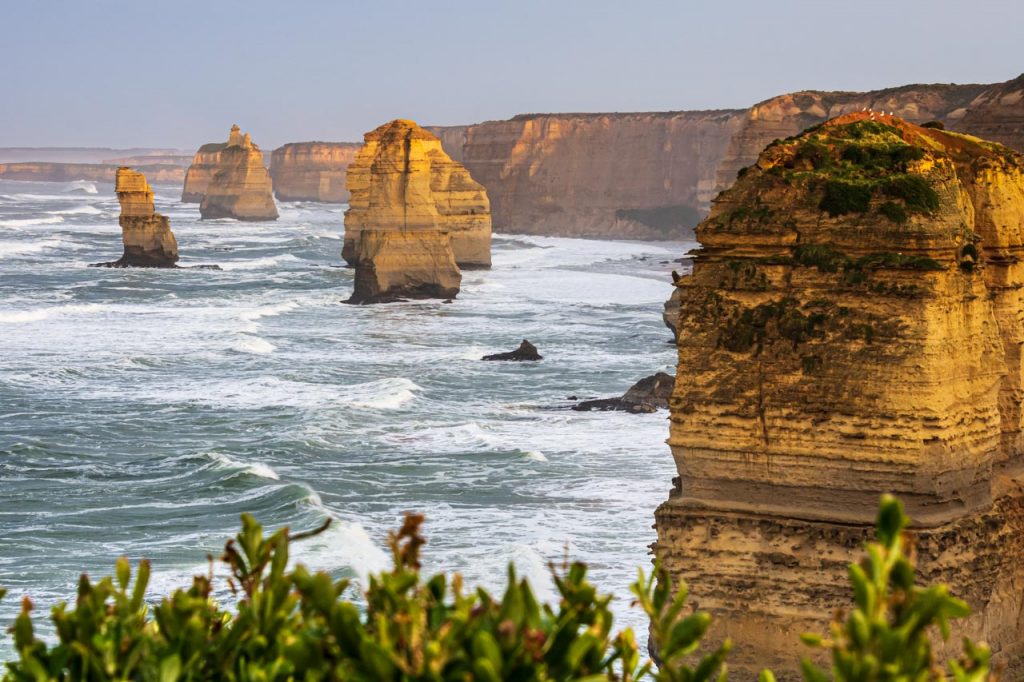 The Great Ocean Road is Australia’s most famous coastal drive and one of the best road trips in the world. Famed for its stunning scenery, what better way to show you the natural phenomena, incredible wild views, and beauty of the Great Ocean Road than through the photographs I took on a photo tour road trip. Enjoy!

Victoria’s Great Ocean Road was placed on the Australian National Heritage list in April 2011 as a place of outstanding national heritage significance. The 242-kilometre Great Ocean Road follows the stunning coastline of Victoria’s southwest from Torquay to Allansford. The road winds along clifftops beside breathtaking headlands, down onto the edge of beaches, across river estuaries and through rainforests, offering ever-changing diverse landscapes and views of Bass Strait and the Southern Ocean.

The Great Ocean Road was built by returned soldiers between 1919 and 1932 and dedicated to soldiers killed during World War l. The road is the world’s largest war memorial.

As a keen amateur photographer, I often seek out photography tours around the world. I firmly believe I can never stop learning and what better way to learn and master landscape photography than out of the classroom with a professional photographer by your side guiding you along the way.

Mark Gray Photography’s tours are suitable for amateur to semi-professional photographers and are limited to 6-8 participants, ensuring everyone gets plenty of individual tuition at each location from the accompanying professional and experienced photographer. The Great Ocean Road Photo Tour locations, accommodation, and meals were well researched by Mark Gray Photography, with appropriate scheduling across the five days. 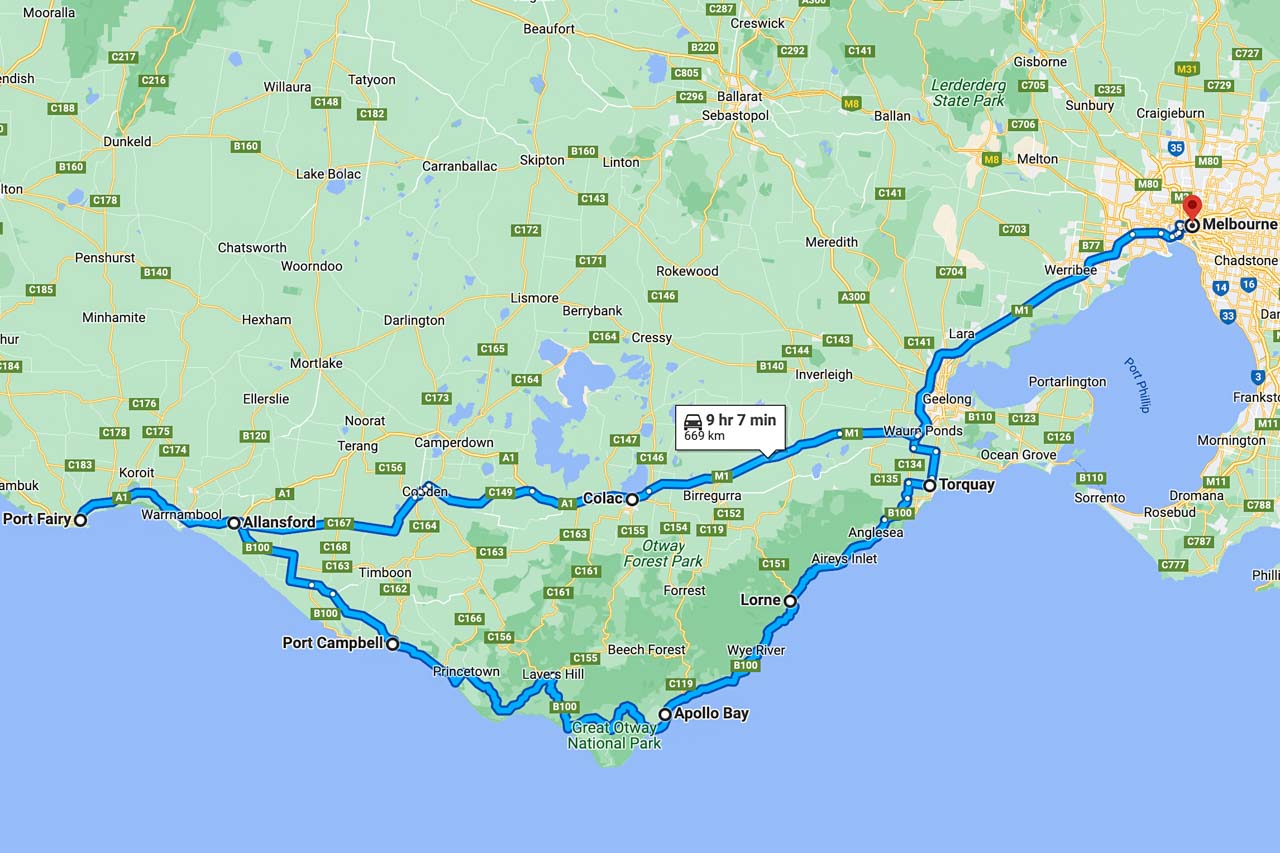 The pickup point for our Great Ocean Road Photo Tour was in Melbourne outside St Paul’s Cathedral, near Flinders Street Railway Station.

The photos below are shown in the order in which they were seen and taken, giving a visual journey along the spectacular Great Ocean Road. 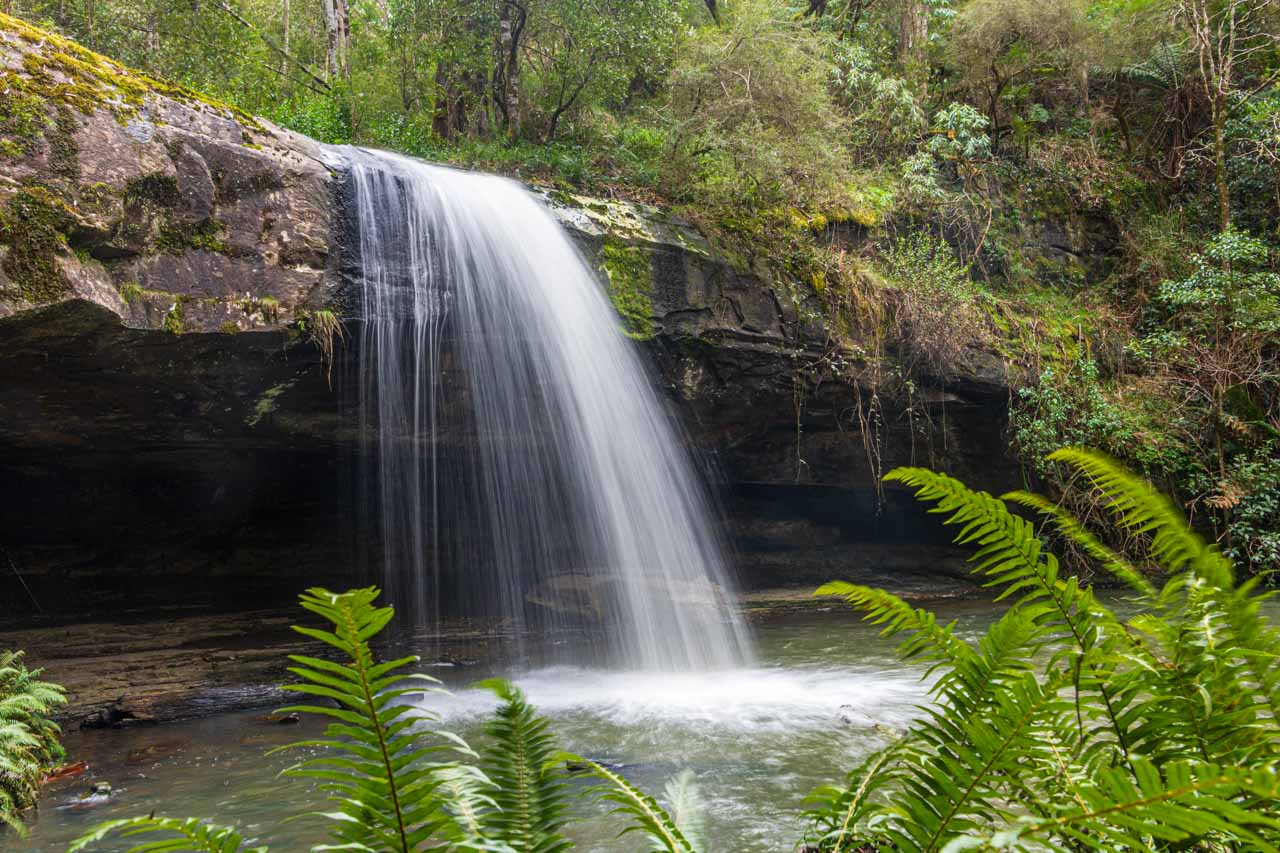 Leaving from Sheoak Picnic Area near Lorne in the Great Otway National Park, the six-kilometre return walking track to Lower Kalimna Falls through the creek valley follows the old trolley way used many years ago for hauling timber to Lorne. 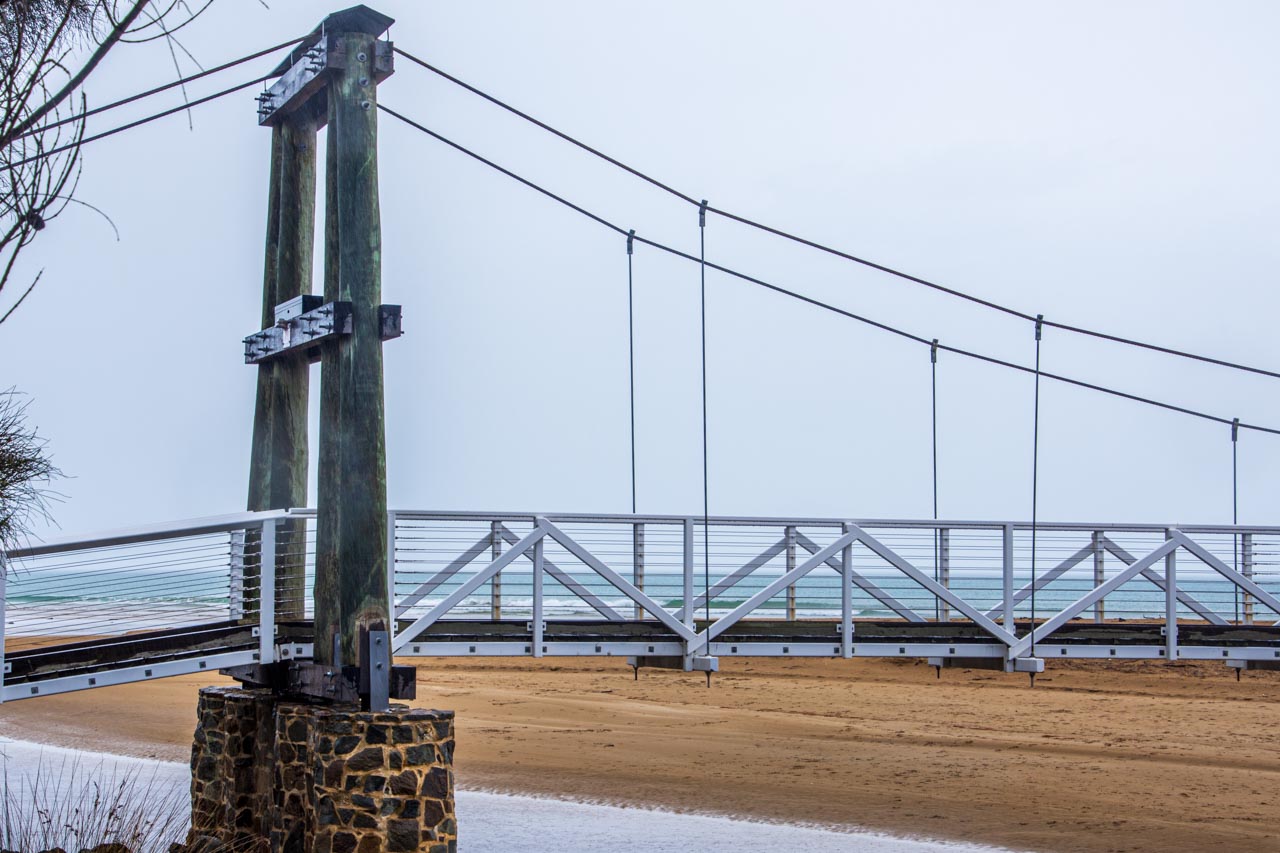 The Lorne Suspension Bridge is a timber footbridge over the Erskine River near its mouth. An iconic landmark of Lorne, the bridge was completed in 1937.

Redwoods of the Otway Ranges 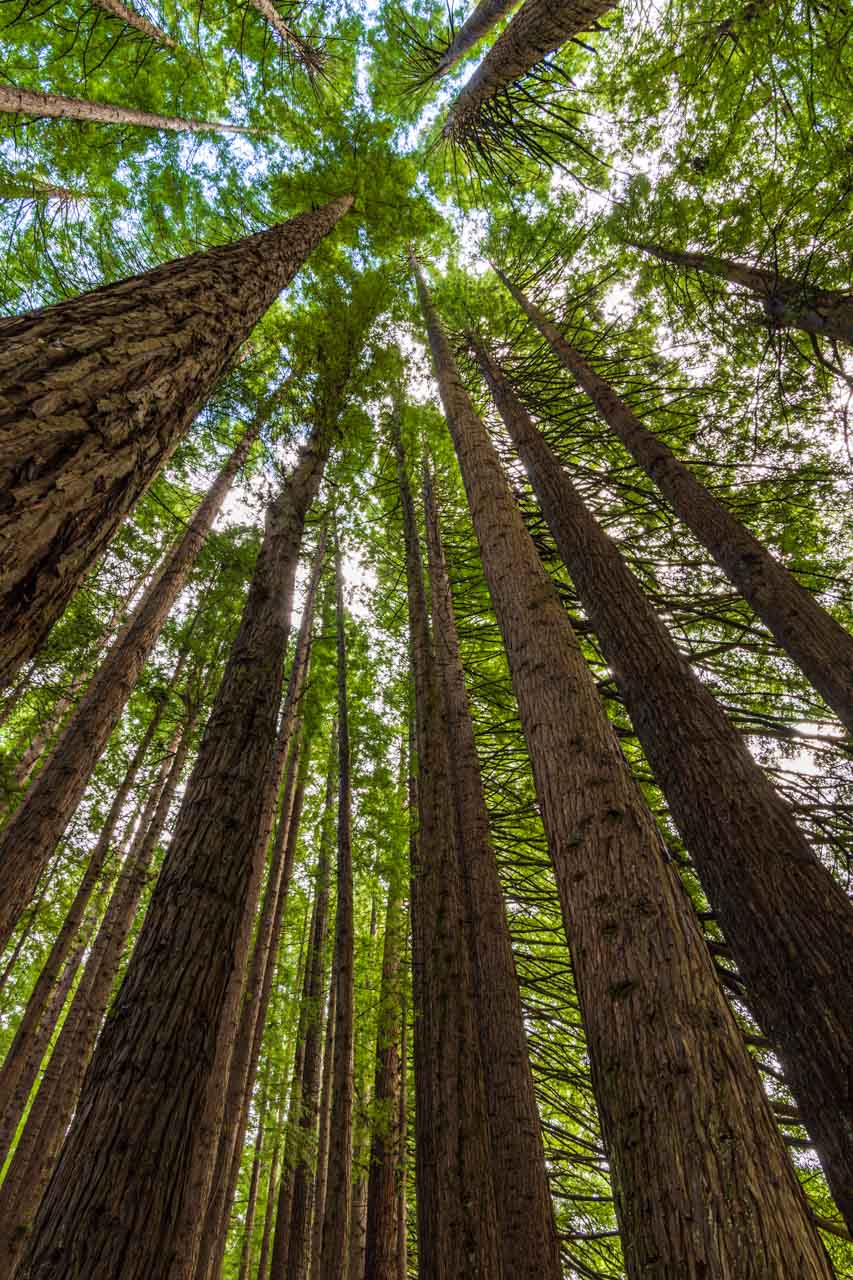 Beech Forest in the Great Otway National Park is home to a thriving small, sheltered grove of Coastal Redwoods – the world’s tallest tree species. Towering on the river flat at Aire Valley Plantation, these redwoods were planted in 1936 by Victorian foresters for experimental purposes. They were never cut down, and although still in their infancy growth phase, they now stand about 60 metres high. Even though ‘babies’, their height as they reach for the sky still left me in awe of the sight.

It was very peaceful walking through the grove as I listened to the rippling of the water from the river flowing beside the grove of redwoods.

There is a picnic area across the road from the redwoods. 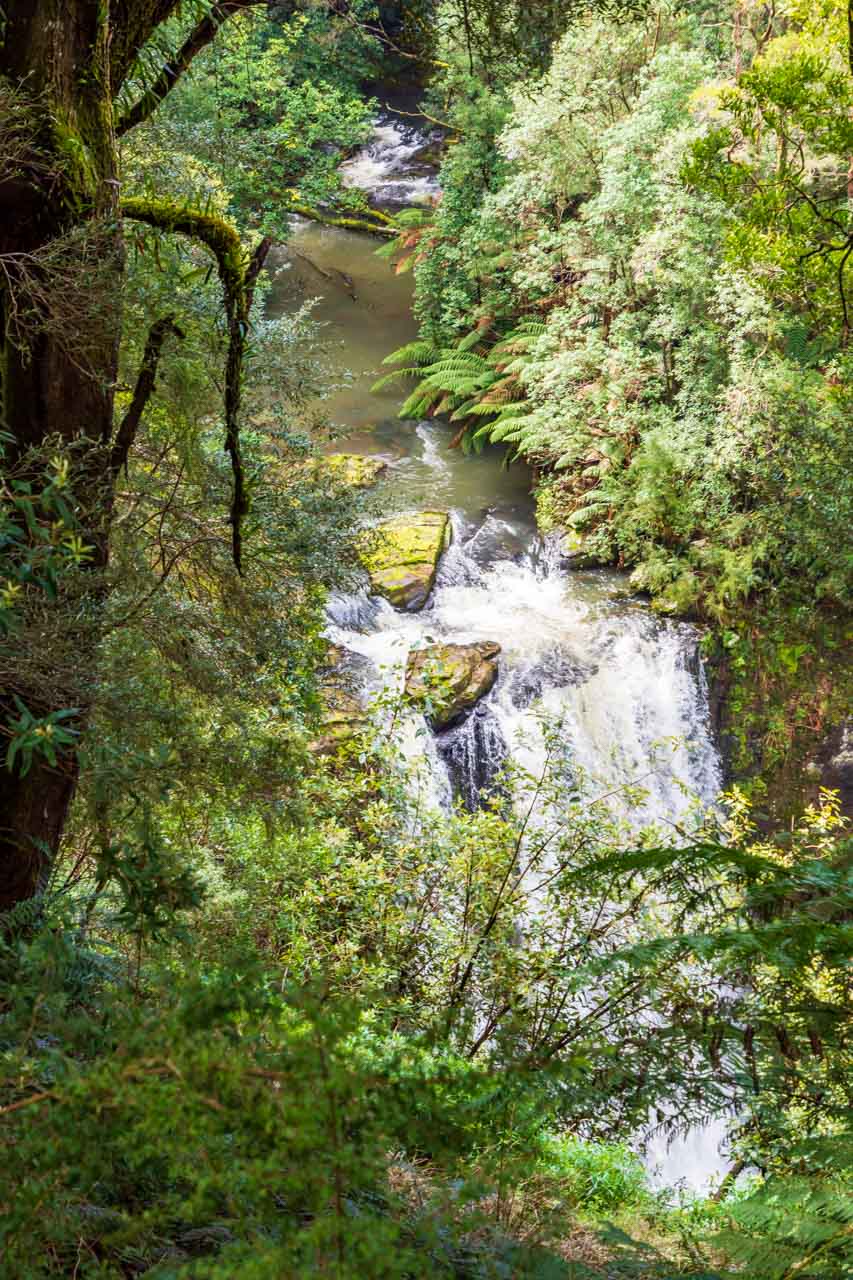 Deemed by some as the most beautiful waterfall in Victoria, Hopetoun Falls in Beech Forest plummets 30 metres into the Aire River. Take in the view from the upper platform or descend around 200 stairs to the bottom of the falls. 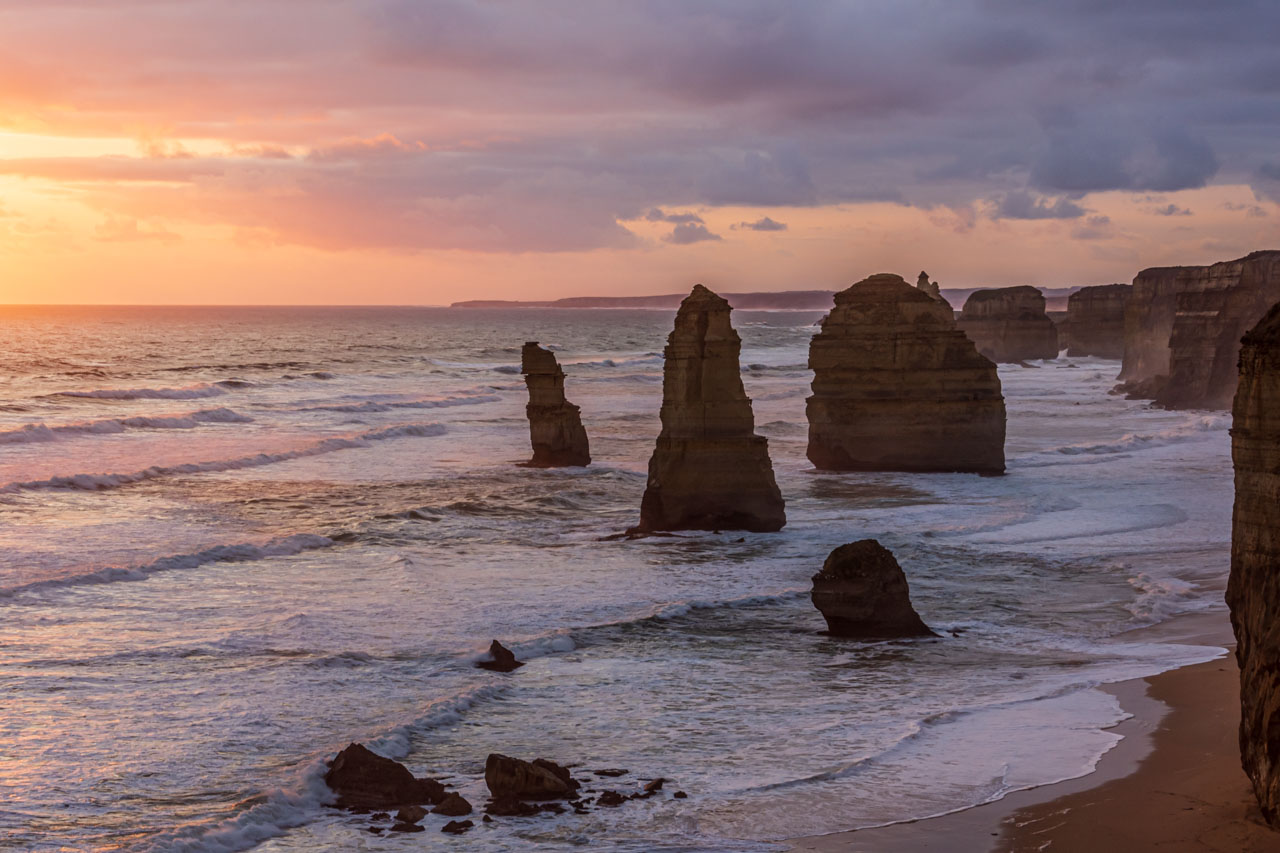 The setting sun turns the ocean pink at the Twelve Apostles 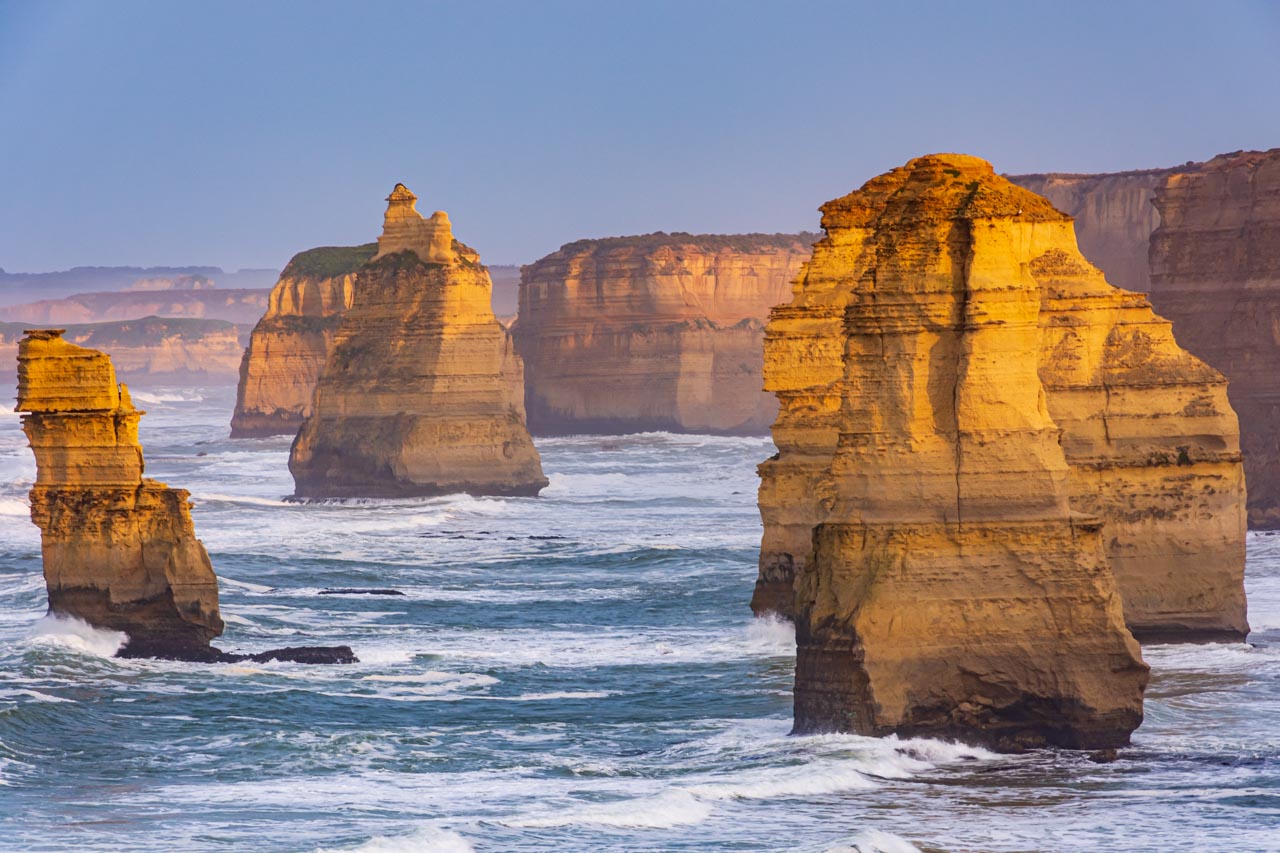 The Twelve Apostles is one of Australia’s iconic landmarks and the most photographed along the Great Ocean Road.

The Twelve Apostles is a collection of limestone stacks off the shore of Port Campbell National Park, formed by erosion over millions of years. The harsh and extreme weather conditions from the Southern Ocean along Victoria’s coast gradually erode the soft limestone to form caves in the cliffs, which become arches that eventually collapse, leaving rock stacks. Just as the winds and rough waves create the stacks, they also destroy them.

Despite the name, there were never twelve rock stacks, only ever nine. The nine became seven (according to Parks Victoria) after one collapsed in 2005 and another in 2009.

The Twelve Apostles was originally known as Sow and Pigs, with Muttonbird Island being the sow and the stacks being the pigs. The name change was solely due to marketing purposes, as the ‘Twelve Apostles’ had a better ring to it. 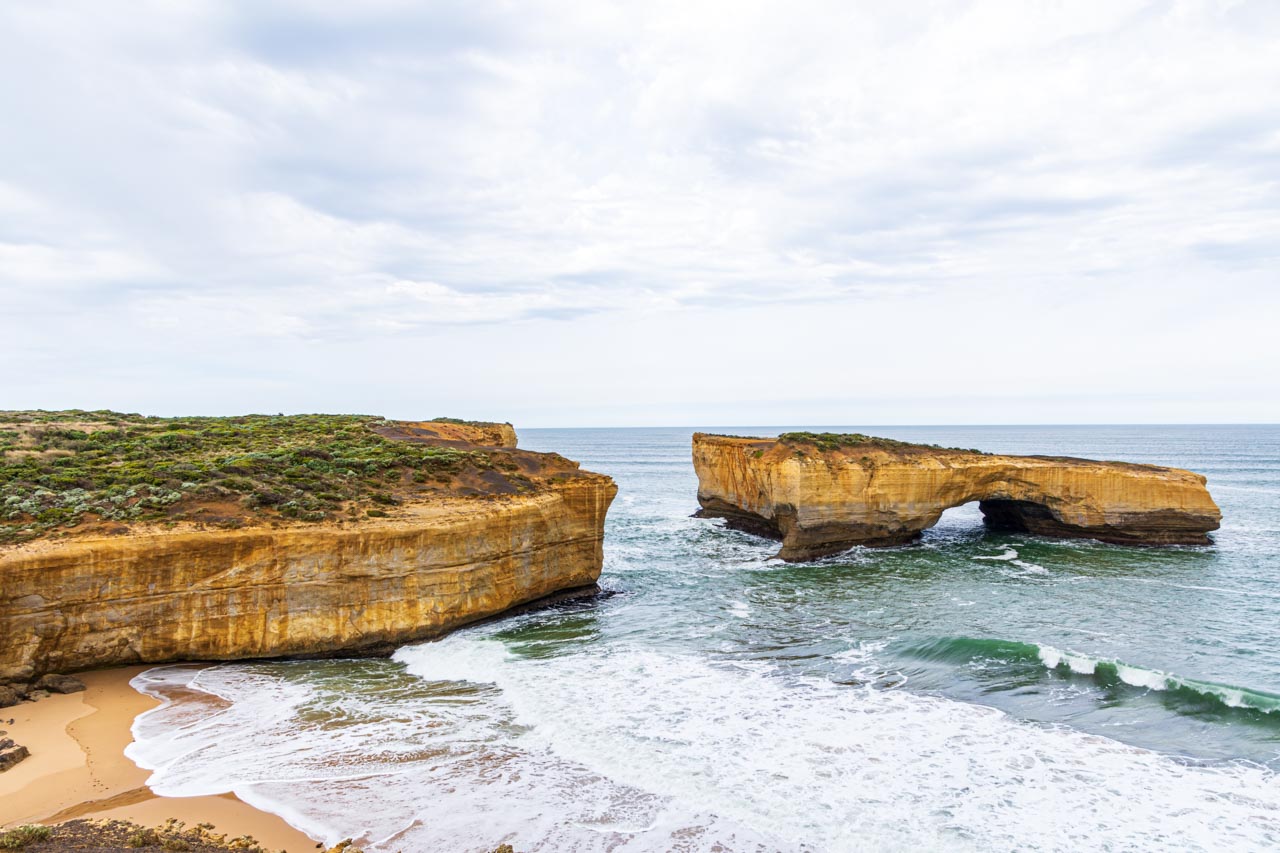 The arch of London Bridge was once connected to the mainland by a natural span that people could walk across, hence the name. The span collapsed on 15th January 1990, disconnecting the arch from the mainland forever. At the time of the collapse, two tourists were stranded on top of the arch and had to be rescued by helicopter. No one was injured in the event. 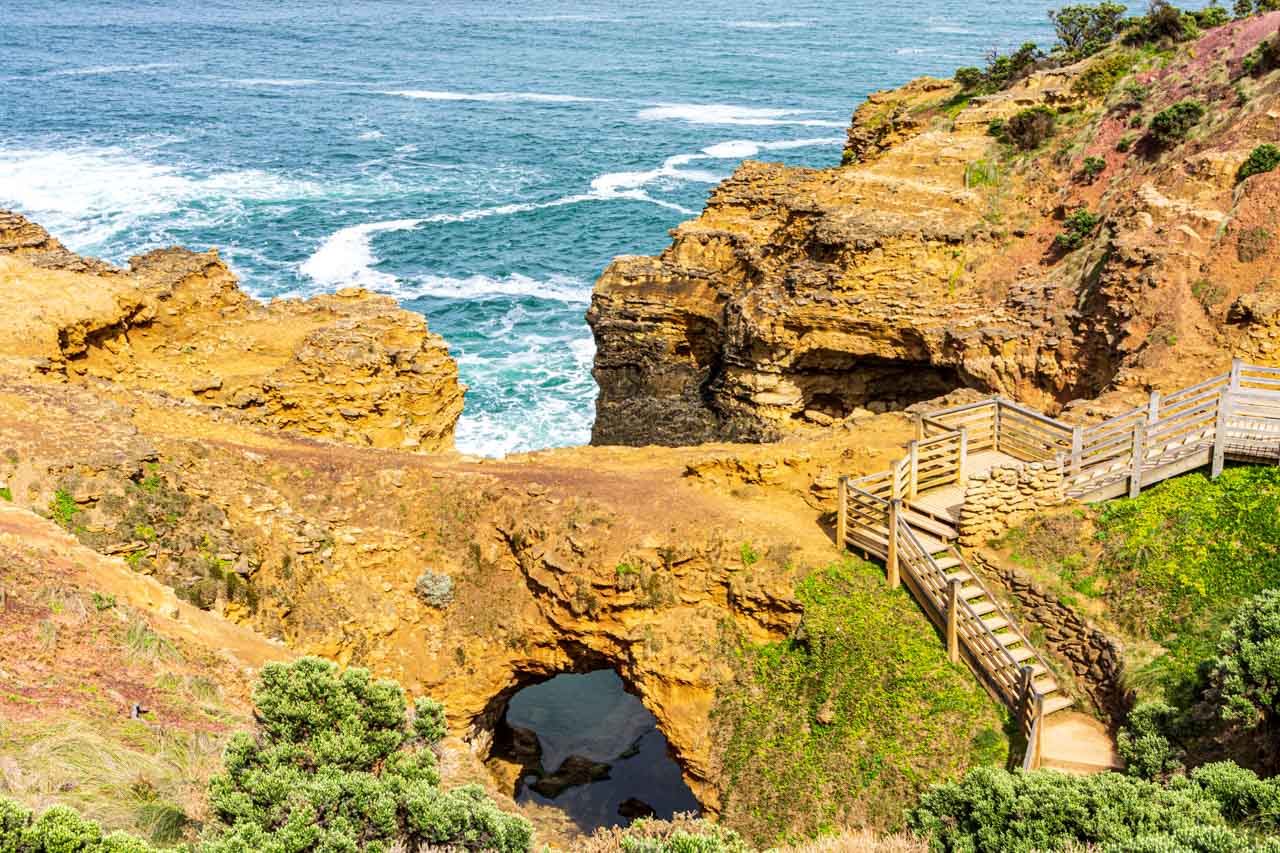 The Grotto, nine kilometres west of Port Campbell, is a cave, sinkhole, and archway all in one. The Grotto is a natural phenomenon formed over millions of years of crashing waves and high winds eroding the rocks, resulting in a caved sinkhole within the limestone cliffs.

You can reach the bottom via a wooden staircase that winds down the cliff face from the viewing platform at the top. 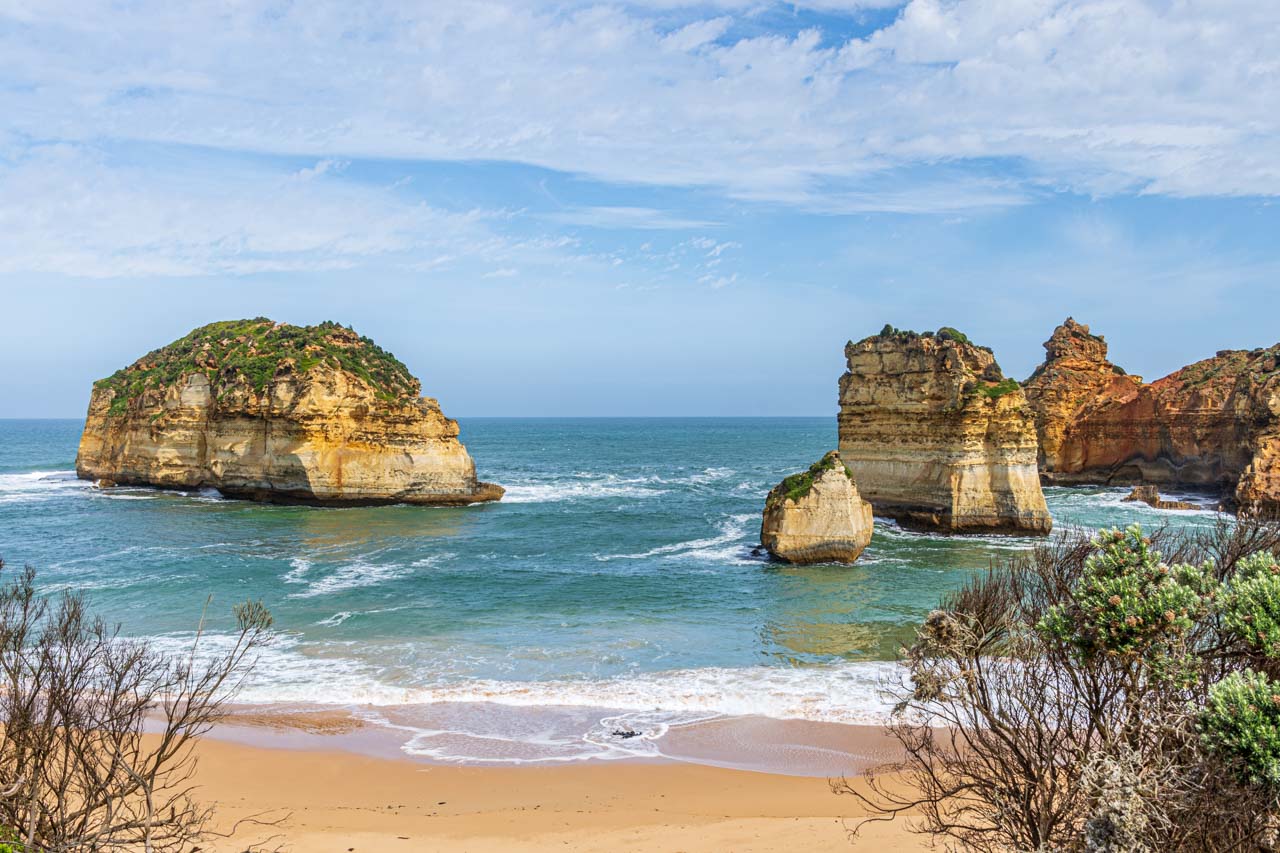 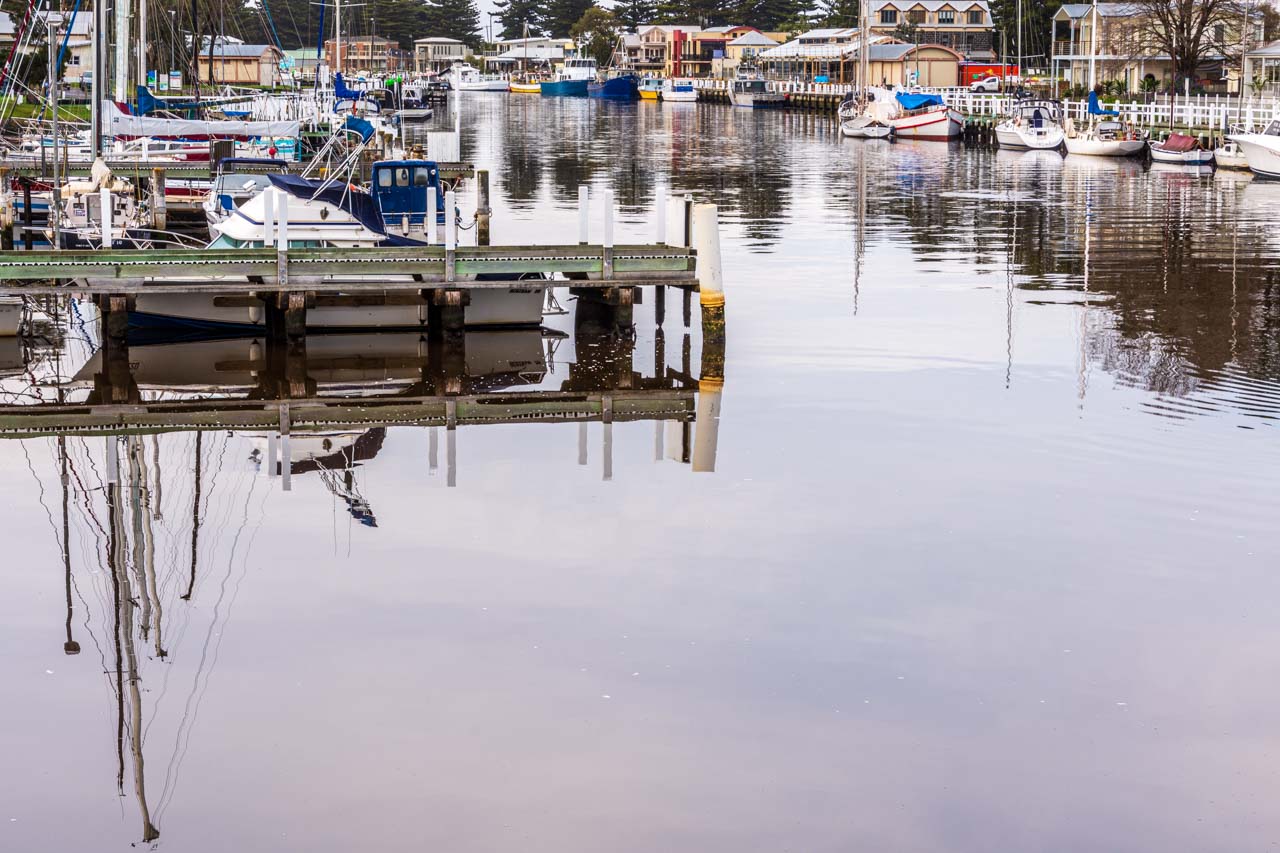 Port Fairy is a historic fishing town located on the Moyne River. 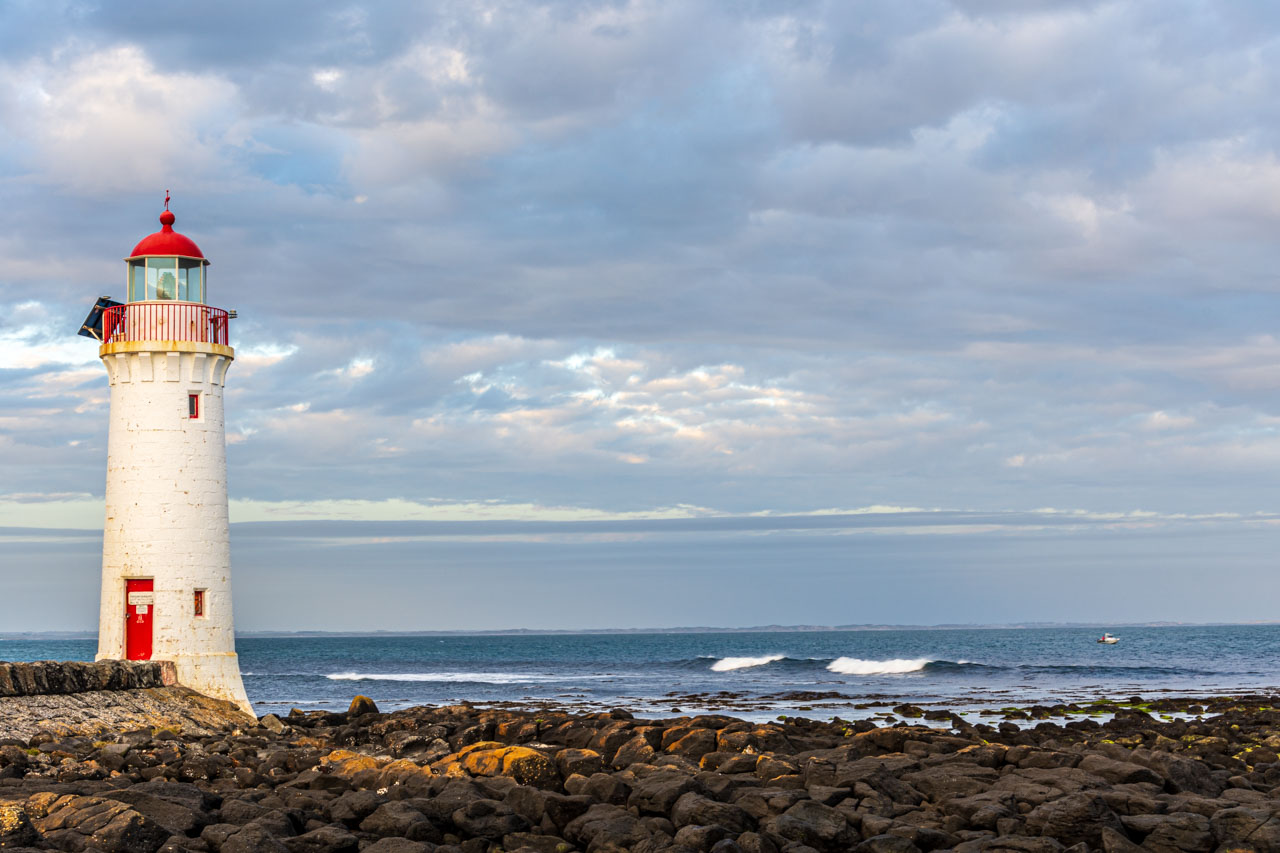 Griffith Island Lighthouse is situated at the end of a 400-metre walk along the causeway from Martin’s Point in the historic town of Port Fairy. It was built in 1859 and saw the last lighthouse keeper in the 1950s when the light, visible over 19 kilometres out to sea, was automated. The lighthouse is still fully operational, guiding ships into the Moyne River. 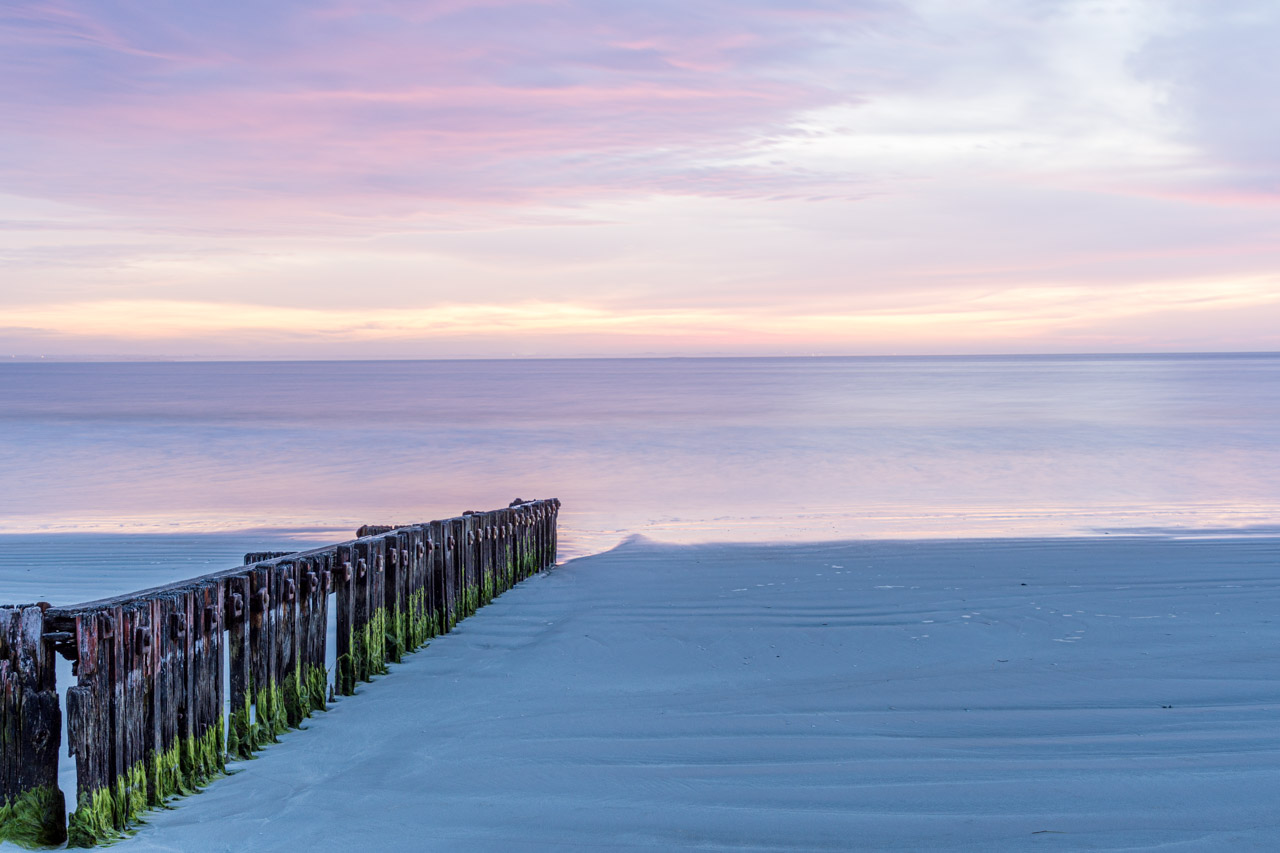 Groynes are structures (usually made of wood, concrete, or stone) built out into the sea from a beach to control erosion and drifting. Port Fairy’s groynes were placed at the southern end of the East Beach to stabilise the sand that had been eroding.

Tip: Fingerless gloves would be a good investment for sunrise shoots.

I recommend the accommodation chosen by Mark Gray Photography on our Great Ocean Road Photo Tour.

On our five days / four nights trip, we stayed one night in Apollo Bay, two nights in Port Campbell, and one night in Port Fairy.

Seafarers Getaway, Apollo Bay, is situated opposite a private beach with all accommodation offering uninterrupted beach and coastal views. I had a well-equipped Beach Studio Unit with a furnished front deck and spectacular views of the breaking waves on the sand. The only downsides were six wall pegs in place of a wardrobe – okay for one night but would be annoying if staying longer – and the rug-less tile floors, which are great in summer but cold on the feet in winter.

Southern Ocean Villas, Port Campbell, is luxury accommodation on the edge of Port Campbell National Park and only a five-minute drive to the Twelve Apostles. Each villa is fully self-contained with two or three bedrooms, an open-plan kitchen and lounge/dining area, laundry, and an outdoor deck with table and chairs. While the bedrooms were dark (not an issue), the living area was light and airy.

Victoria Apartments, Port Fairy, is in the heart of the township of Port Fairy. I stayed in a one-bedroom suite, but other accommodation types are available. The suite’s living area was open planned, but the kitchenette was tiny. However, its winning features were a separate bedroom and a private courtyard. The accommodation was small and a bit cramped but adequate for a short stay for one person.

The 5-day Great Ocean Road Photo Tour with Mark Gray Photography was not a holiday but a dedicated photography workshop and is advertised as such. Our days were long and busy, often starting at sunrise, with little time to relax. But it was a unique way to visit the Great Ocean Road’s fantastic attractions and certainly met my long-term desire to ‘see’ the Great Ocean Road. Furthermore, I learned so much about my camera and landscape photography and came away with photos I am proud of.

You don’t have to be a photographer to appreciate the spectacular scenery and landscapes that the Great Ocean Road offers up at every turn. Take your time to discover and explore this most iconic Australian road trip along Victoria’s rugged southern coastline. 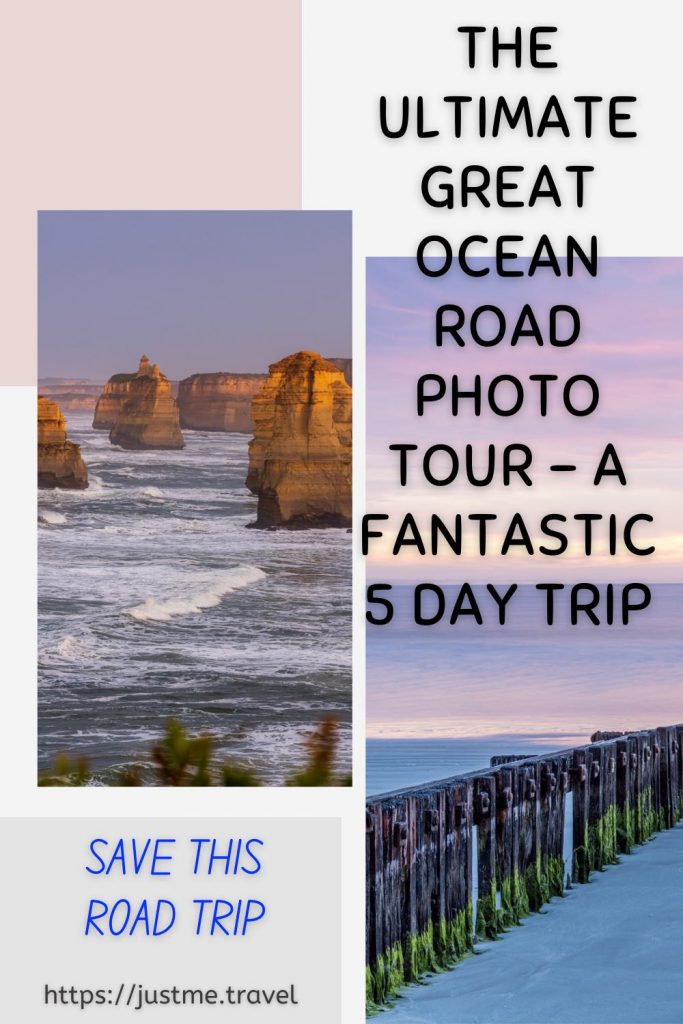 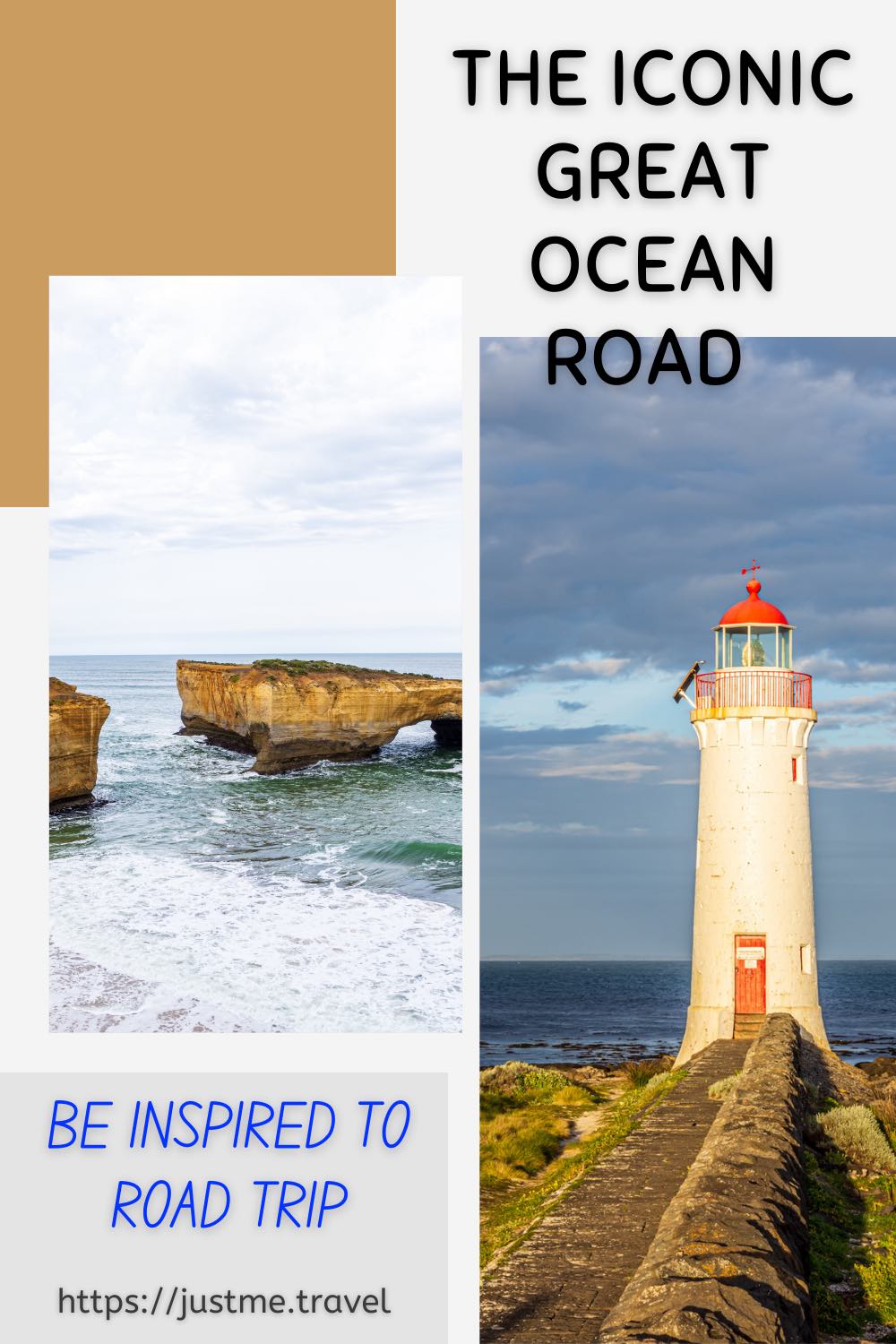 Australia lends itself to great road trips. Read and save the following posts for more road trips around Victoria.

Post Views: 288
Great Ocean RoadGuided tourRoad trip AustraliaRoad trip VictoriaToursTravel blogTravel photo storyTravel photography photosVictoria Australia
Like Tweet Pin
Joanna Rath
With a passion for photography and writing, Joanna has been solo travelling across the globe for the last 25 years. Follow her journeys, read her reviews and discover places to see on justme.travel