AN ANNUAL EVENT NOT TO BE MISSED Dear Ryan, Voodoo Day in Benin falls on January 10 each year and is a national holiday celebrating the country’s heritage of the…

AN ANNUAL EVENT NOT TO BE MISSED

Voodoo Day in Benin falls on January 10 each year and is a national holiday celebrating the country’s heritage of the West African religion of Voodoo (or Vodoun as it is known in Benin).

My trip to West Africa was coordinated around attending Benin’s Voodoo Festival in Ouidah.

Ouidah is regarded as the birthplace of Voodoo, which is one of Benin’s official religions. It is probably one of the most misunderstood religions in the world. I have to admit it was curiosity that fed my travel plans to include the Voodoo Festival in Ouidah. I wanted to witness this annual celebration of Benin’s heritage and traditional culture, and to experience a unique festival.

My participation at the Voodoo Festival commenced with a visit to Ouidah’s Temple of Pythons – home to some 60 pythons. They are said to be docile, which was just as well because they are free to roam. The pythons are a major symbol for followers of Voodoo. They are not feared but are revered and worshiped. It was here, through a break in the trampling crowd, that I momentarily sighted the Voodoo Pope who had come to pay homage at the Temple of Pythons.

Women Voodoo followers at the Temple of Pythons in Ouidah, Benin

From the Temple of Pythons, the Voodoo Pope led a procession along the historical, 3-kilometre Slave Road to the ‘Door of No Return’ (of slave trade infamy) on Ouidah’s beach along the Atlantic coast. It was here, on this stretch of sand, that the celebrations of the Voodoo Festival truly got underway.

Once the dignitaries’ speeches were completed (this took over an hour), it was all action. The Voodoo Pope, whilst hidden within a circular wall of blue plastic away from public view, sacrificed a goat to appease the spirits and Voodoo gods. Animal sacrifice is a fundamental element in Voodoo. No Voodoo ceremony is worth its salt without an animal sacrifice in exchange for favours from the spirits.

Immediately following the sacrifice, the Voodoo Pope made his way to his throne, which was placed in the shadow of the Door of No Return. I say ‘throne’ because the festival hosts referred to him as, “His Majesty the Pope”.

With the Voodoo Pope seated, the atmosphere changed. The speeches gave way to vibrant displays of dancing and the throbbing of drums. I witnessed ‘exorcisms’ in which a seemingly possessed person would run away from a group of people; to be caught, dragged to the ground, and have powder sprinkled over him. The crowd became particularly excited when coloured haystacks appeared, spinning around the grounds. I learned these ‘haystacks’ are Voodoo spirits known as Zangbeto and are the traditional Voodoo guardians of the night – the Nightwatchmen. They are the unofficial police force and dispensers of justice. I did not envy the human police who battled to keep the crowds from encroaching on dancers and Voodoo spirits.

So much was happening in different areas of the Festival grounds that I didn’t know where to stay or where to go next; what to watch (fighting the crowds to do so) or what to move on from. This went on for a couple of hours until I decided it was time to sit down and people watch.

Overall, the celebrations taking place at the Voodoo Festival in Ouidah was a hive of activity in which people would swarm from one dance display to another. The Festival was dominated by a kaleidoscope of colour from the attire worn by attendees, and a cacophony of noise from the frenzied pounding of drums. The crowd was buzzing. [Sorry about the bee analogies but that’s exactly how it was.]

But, perhaps the best way to describe the Voodoo Festival is to share some photos with you.

This was a never to be forgotten experience. 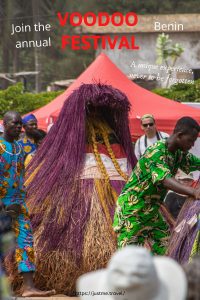 END_OF_DOCUMENT_TOKEN_TO_BE_REPLACED
No Comments on BENIN CELEBRATES VOODOO DAY WITH AN AMAZING JOYOUS FESTIVAL
Joanna Rath
With a passion for photography and writing, Joanna has been solo travelling across the globe for the last 25 years. Follow her journeys, read her reviews and discover places to see on justme.travel

I loved exploring Malta, and it was so easy to get

Here are the last of the UNESCO World Heritage Sit

Continuing my travels to UNESCO Sites through sout

UNESCO Sites visited on a trip through southern It