Location of the Sassi di Matera

THE SASSI DI MATERA – from national shame to cultural showcase

If you want to see a city reinventing itself, then now is the time to visit Materia – especially the revitalisation of the Sassi di Matera. Matera’s Sassi has a…

If you want to see a city reinventing itself, then now is the time to visit Materia – especially the revitalisation of the Sassi di Matera. Matera’s Sassi has a colourful history that has seen it go from the earliest inhabited city in Italy, to a place of national humiliation, to Italy’s pride. This history, all of which is still visible today, makes the Sassi di Matera a matchless tourist destination. Matera’s Sassi has been reborn and now is the time to witness that rebirth while Matera celebrates its recognition as a city of culture.

A brief history – from shame to gain

Italy’s southern city of Matera (along with Bulgaria’s, Plovdiv) is the 2019 European Capital of Culture. For this honour, Matera receives hundreds of millions of euros to develop infrastructure and present year-long cultural and art activities; activities designed to improve the quality of life in the city and to strengthen a sense of community. It is expected that being a European Capital of Culture will bring fresh life to the city and will enhance Matera’s cultural, social and economic development. It is an opportunity for Matera to showcase itself internationally and to boost tourism. An opportunity Matera needs in order to reclaim its dignity and credibility in the eyes of Italy and the world.

This is a chance for Matera to leave behind its reputation as the “Shame of Italy”. The object of this shame is the Sassi di Matera (literal translation from Italian, “Stones of Matera”). The Sassi are a prehistoric troglodyte settlement and people have lived in these cave dwellings since 7000 BC.

In his book, Christ Stopped at Eboli (published 1945), Carlo Levi put the Sassi di Matera on the world map when he highlighted the poor living conditions. He painted a picture of abject poverty. Malaria, cholera and typhoid were rampant in the Sassi. Families and their animals were living together under the same roof in dwellings with no natural light or ventilation, no electricity, water or sewers and there was a high infant mortality rate.

The Sassi became an embarrassment for the Italian Government. So much so that in 1950 the Prime Minister declared a state of emergency, and plans were put in place to move the Sassi’s inhabitants out. By 1952 the Sassi was empty; abandoned through forced removal.

After sitting dormant for a couple of decades, the Sassi started to go through a transformation; starting in the 1970s with artists and hippies rediscovering Matera’s Sassi. This urban renewal, and a younger generation expressing their desire to have the caves brought back to life, led the Italian Government to pass a law in 1986 to repopulate the Sassi; connecting water and electricity and subsidising restoration work in order to encourage the Sassi’s revival.

And the people did come – restoring caves as homes, hotels, restaurants and bars. But many are still uninhabitable.

The Sassi di Matera’s revival was further cemented in 1993 when listed by UNESCO as a World Heritage Site for being “the most outstanding, intact example of a troglodyte settlement in the Mediterranean region”.

A new image of the Sassi is forming and the tourists are coming. The Sassi di Matera have been transformed and Matera is the 2019 European Capital of Culture.

My visit to the Sassi di Matera

The Sassi are carved into the limestone cliffs of a ravine gauged out by the Gravina River. My first sighting of the Sassi di Matera was from across the ravine. What I saw from this vantage point was a mass of caves clinging to the steep slope. On top of these caves is the new city of Matera – a unique juxtaposition. 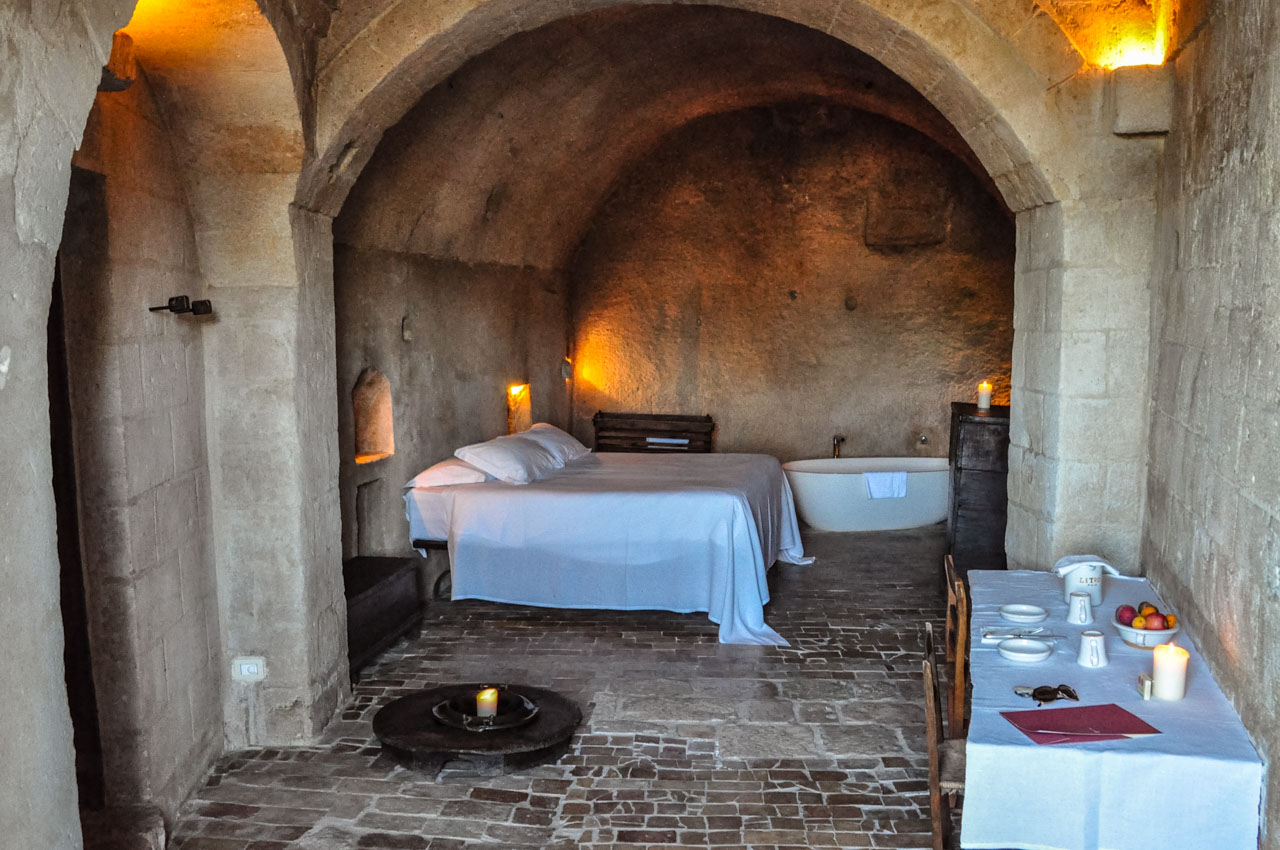 My second introduction to the Sassi was my hotel, Le Grotte della Civita. Sitting on the edge of the ravine in the most ancient Sassi area, Le Grotte della Civita consists of 18 rooms. All the rooms are individual caves that have been beautifully restored whilst retaining their original features. The furnishings are simple but tasteful, with much of the lighting provided by candles. Breakfast, served in a reclaimed cave that was a church, was typical of Southern Italy – breads, cakes, pastries, James, meats and cheeses. This was truly a memorable place to stay. 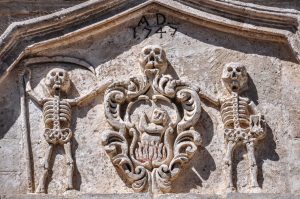 Carving on the facade of the Church of Purgatory 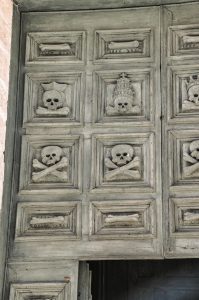 Matera has 180 churches; 40 of which are in the Sassi, including the Cathedral and the rock-cut Church of Santa Maria di Idris. My favourite was the Church of Purgatory. Completed in 1747, its recurring and only theme is that of death. The baroque façade of the church and its doors are covered with carvings of skulls, skeletons and crossbones. While a church focusing on death might seem a bit Grim Reaper-ish, it was actually fashionable at the time of construction, as death was not seen as the end but as the beginning of a new life. 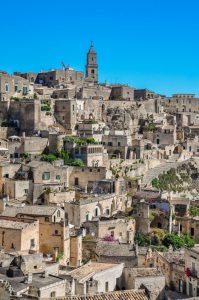 The house-like facades are a deception as they ‘front’ caves

While the Sassi look like a mass of houses, the house-like facades are only that, as the ‘houses’ are dug well into the rock, thereby forming the caves Matera is famous for. 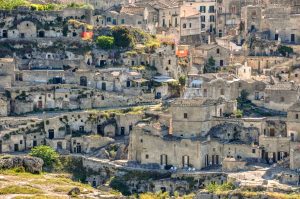 Sassi caves on caves and roads on cave roofs

Houses in the Sassi are often built on top of other houses and many of the streets are built on the roofs of houses.

One would be forgiven for thinking the Sassi are a place of shadow and crampedness. But not so. The squares in the Sassi are sun-drenched open spaces flanked by cafes, shops, churches and restaurants. And great for people watching.

I took a walking tour with a local guide in the morning to get acquainted with the Sassi. This included learning the history of the Sassi di Matera, visiting a cave dwelling for a glimpse into past life and viewing one of the ancient Rupestrian Churches that date back to the Middle Ages. However, what I enjoyed most of all was just walking around on my own – exploring narrow ‘streets’, talking to the locals, checking out their cafes, and having all the time I wanted to take photos. You will need comfortable shoes to walk around the Sassi. And don’t forget, the Sassi are built on the side of a ravine. So, there are lots of steep steps.

2014: Tourism starts to take off. Most likely due to Matera being announced as one of the European Capitals of Culture for 2019. Matera has 4 years to prepare …

1993: The Sassi of Matera is listed as a UNESCO World Heritage Site

1986: Change in Italian law and people are encouraged to return to the Sassi

1952: Abandonment of the Sassi through the Italian Government’s forced removal of its inhabitants

A bit of trivia for you: Mel Gibson’s controversial movie, “The Passion of the Christ”(2004) was filmed in the Sassi di Matera as too was Pier Paolo Pasolini’s “The Gospel According to St Matthew”. It would seem Matera’s Sassi makes for a great ancient Jerusalem.

Want to take a self-guided walking tour around Venice?…

A VENETIAN WALKABOUT – how to spend 5 perfect days in Venice, Italy [2020 UPDATED]

END_OF_DOCUMENT_TOKEN_TO_BE_REPLACED
5 Comments on THE SASSI DI MATERA – from national shame to cultural showcase
Joanna Rath
With a passion for photography and writing, Joanna has been solo travelling across the globe for the last 25 years. Follow her journeys, read her reviews and discover places to see on justme.travel