Tag: What to do in Broome

15 Photos for 15 Reasons Why You Should Holiday in Tropical Broome, the ‘Capital’ of the Kimberley Broome’s physical environment and cultural richness offer a wide variety of unique experiences…

15 Photos for 15 Reasons Why You Should Holiday in Tropical Broome, the ‘Capital’ of the Kimberley

Broome’s physical environment and cultural richness offer a wide variety of unique experiences for every visitor, whatever your budget. The photos in this post take you on a virtual tour of my experiences and discoveries over six days in Broome.

Broome is the gateway to the spectacular Kimberley region in tropical northern Western Australia – where one of the world’s last wilderness areas meets the Indian Ocean. Broome is about 2,048 kilometres northeast of Perth and approximately 1,871 kilometres southwest of Darwin.

Why should you visit Broome? Below I have focused on 15 personal reasons, presented through 15 photos to tempt you to visit this laid-back town that gets under your skin. With pristine waters, sandy beaches, abundant wildlife, tropical climate, breathtaking colours, and magnificent landscapes, Broome is a unique destination with so much to see and discover.

The Yawuru (pronounced Ya-roo) people are the traditional owners of Broome and surrounding areas. 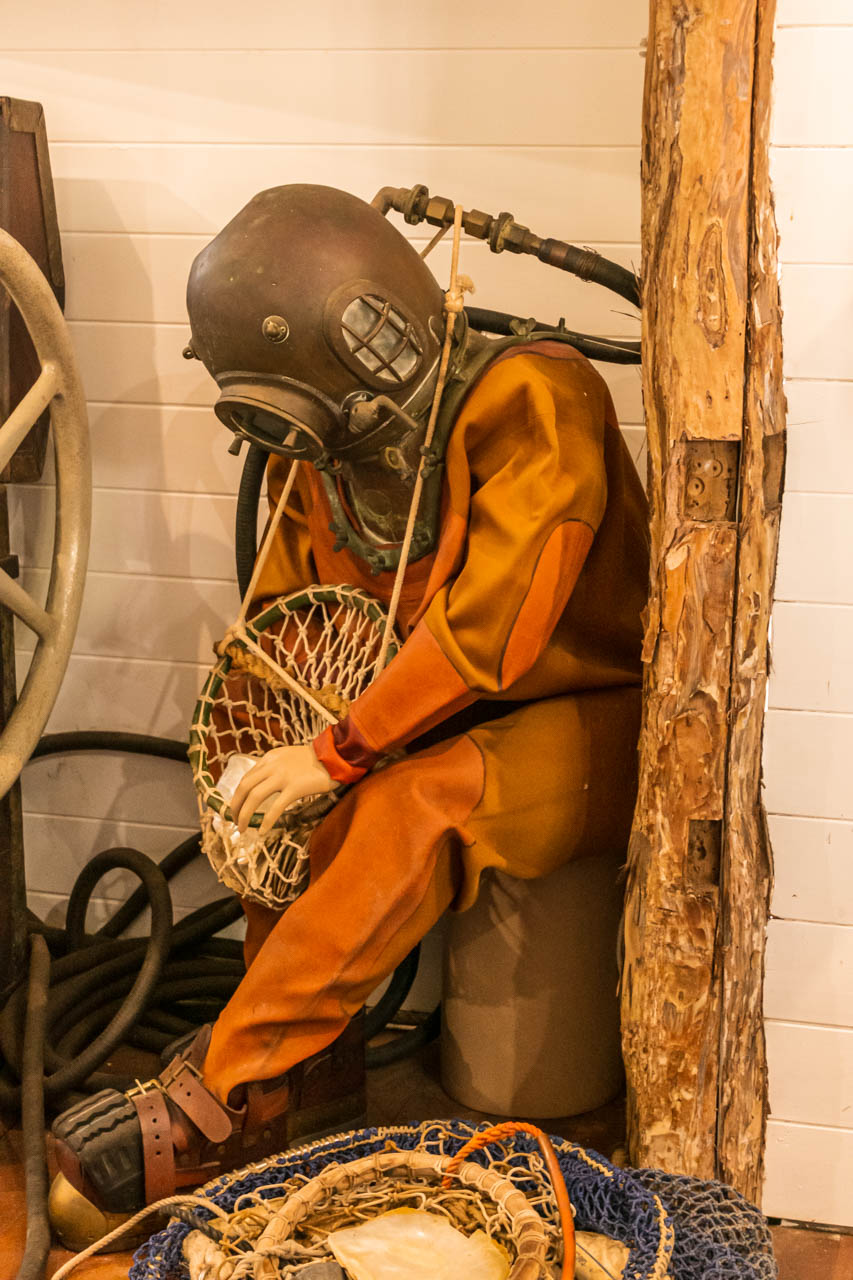 There is a local saying that Broome was built on buttons.

On Dampier Terrace in Chinatown, Pearl Luggers is a unique museum providing insight into Broome’s pearling industry – an industry that commenced life supplying mother-of-pearl for the European market for buttons, combs, and other high-end fashion accessories, to Broome now being the home of the South Sea Pearl.

Peal Luggers features two fully restored wooden pearling luggers (sailing vessel with specific rigging) and 150 years of pearl diving memorabilia. The divers would stay out to sea on the luggers for months at a time.

I was interested in the pearling history of Broome and found the Pearl Luggers tour was a great introduction to that history. It was educational, informative, entertaining, visual, tactile, and insightful. I learned pearl divers risked their lives due to drowning or decompression sickness (the bends) every time they dived for pearl shells. I learned the pearl divers wore 180 kilograms of weights each time they dived, which limited their diving life to 10 years due to carrying all that weight. Many divers now rest in the Japanese cemetery.

The 1.5-hour tour operates daily, concluding with a free sample of the rare pearl meat. I didn’t try this costly delicacy as I wasn’t game to test if my seafood allergy ran to pearl meat. 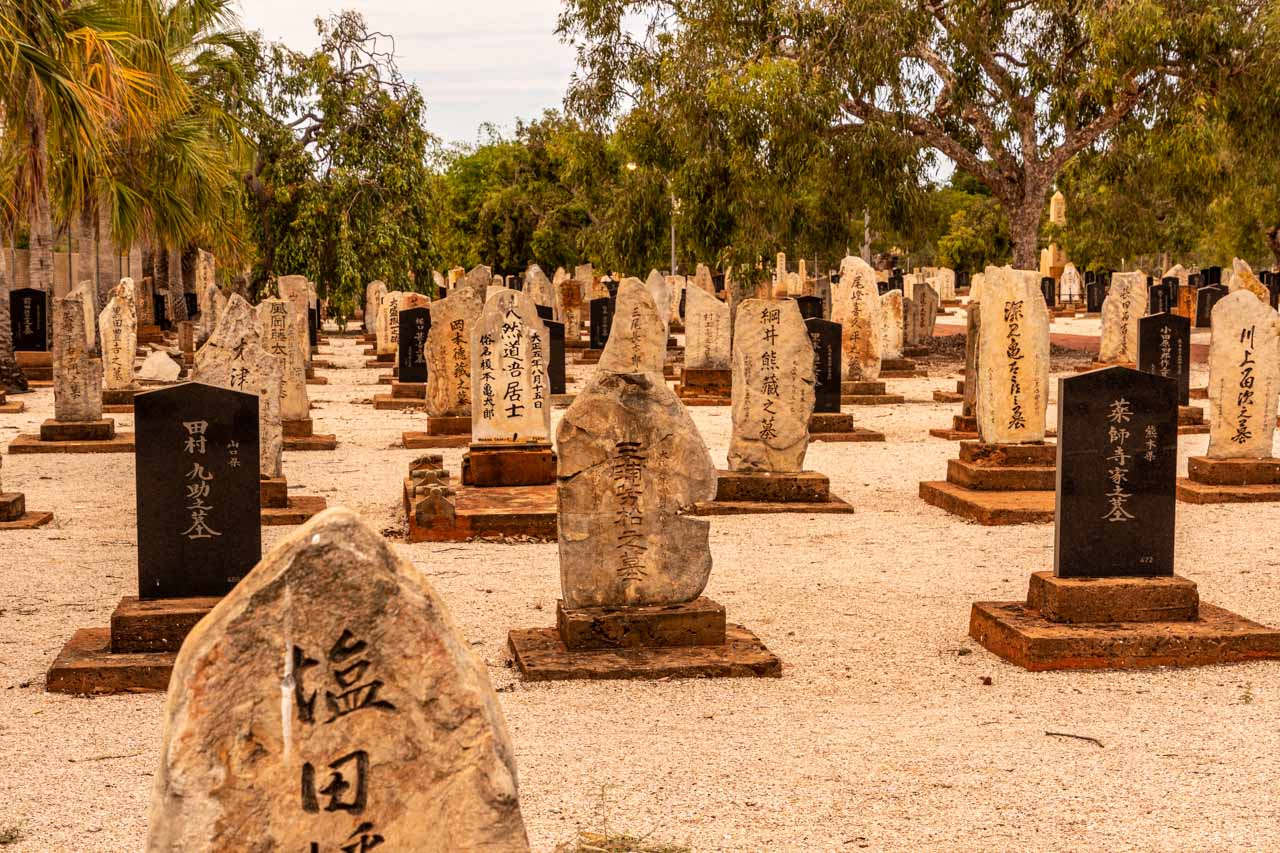 The Japanese cemetery at Broome dates back to the very early pearling years and bears witness to the close ties Japan has with this small north west town. The first recorded interment in this cemetery is 1896.

During their years of employment in the industry, a great many men lost their lives due to drowning or the diver’s paralysis [decompression sickness (the bends)]. A large stone obelisk bears testimony to those lost in the 1908 cyclone. It is also recorded that the 1887 and 1935 cyclones each caused the death of 140 men. In the year 1914 the diver’s paralysis claimed the lives of 33 men.

There are 707 graves (919 people) with them having headstones of coloured beach rocks.

The sheer enormity of the number of deaths among the Japanese pearl divers and the sacrifice they made with their lives to Broome’s pearling industry moved me. The serene beauty of the memorials created an atmosphere for reflection. 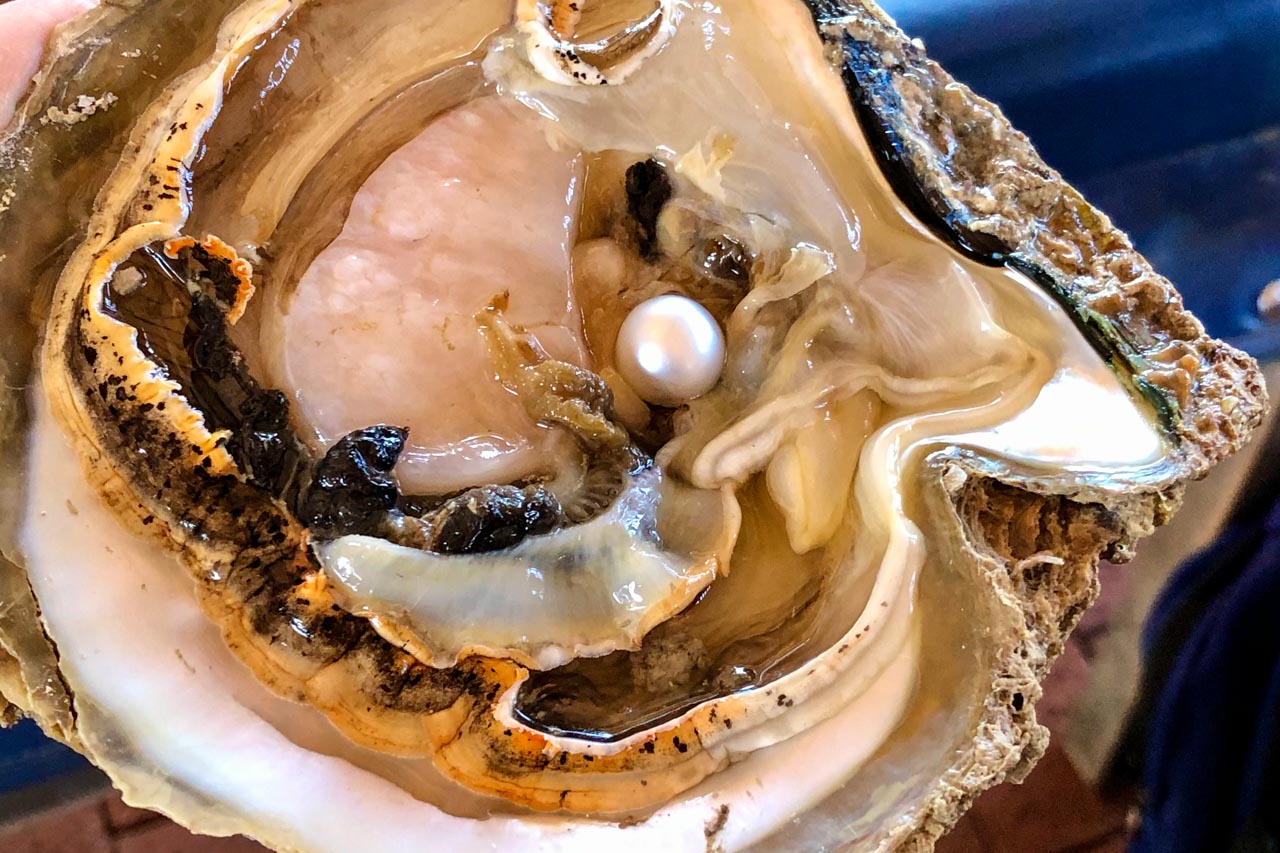 The pearl found in the oyster that was harvested on my tour and was valued at $750.00

Broome was built on its pearling industry. As such, you should not miss a tour of a working pearl farm.

Willie Creek Pearl Farm is a working pearl farm where you can learn all about the process of modern cultured pearl farming – from the birthing and harvesting of oysters through to valuing the pearls, the creation of jewellery, and how to care for your pearls. The tour includes a boat trip on Willie Creek to view the live oysters in panels suspended from lines. The tour finishes with morning or afternoon tea. 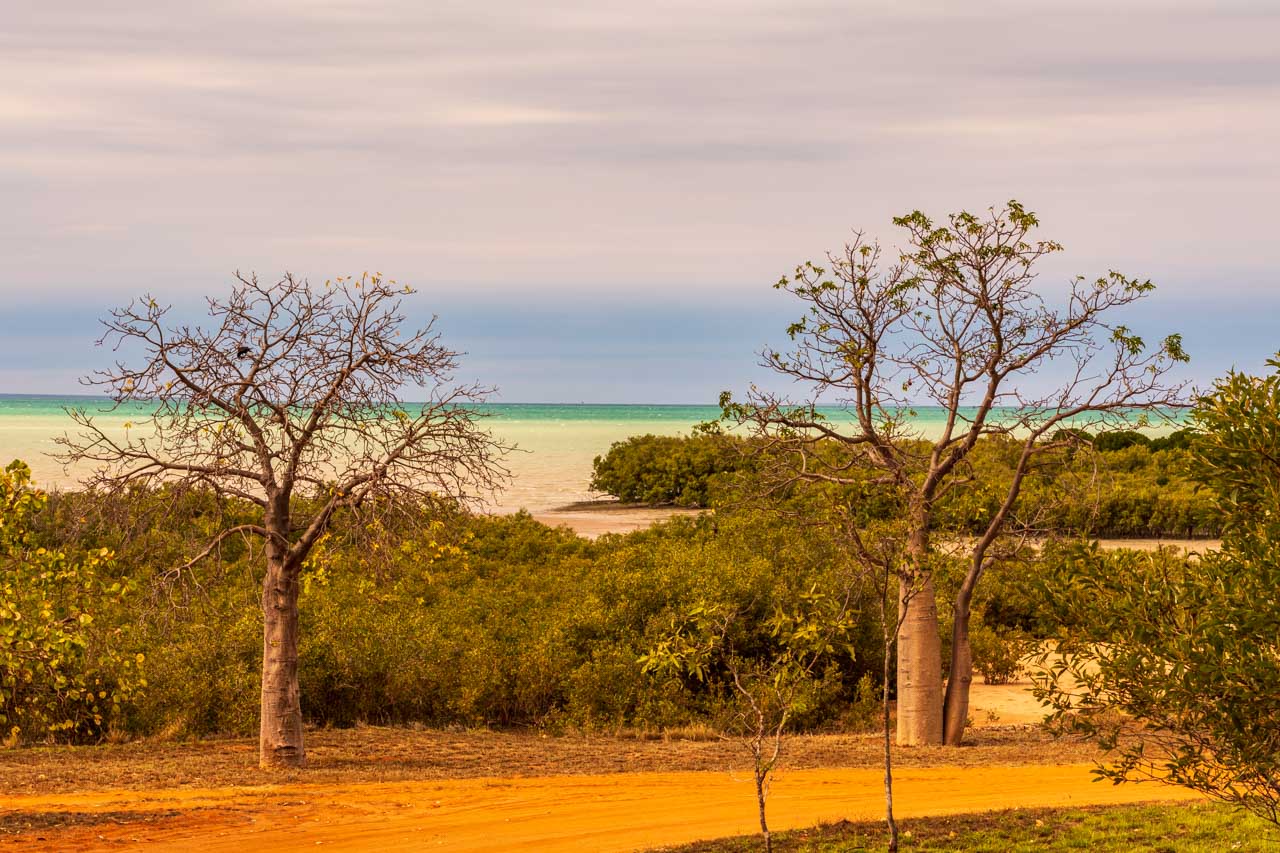 Roebuck Bay is a spectacular landscape

Roebuck Bay is one of Broome’s most beautiful and dramatic natural attractions. The bay’s colours are spectacular, and the enormous tidal variations (up to 10 metres between low and high tides) are remarkable. Town Beach is the best place to sit and observe the ever-changing Roebuck Bay.

Also worth noting: Roebuck Bay is Australia’s newest Marine Park and a national heritage site. Often seen playing, swimming, and fishing in Roebuck Bay is the Australian snubfin dolphin, recognised as a new species in 2005. The bay is also a bird lover’s paradise as it is a great place to view vast numbers of migratory birds. 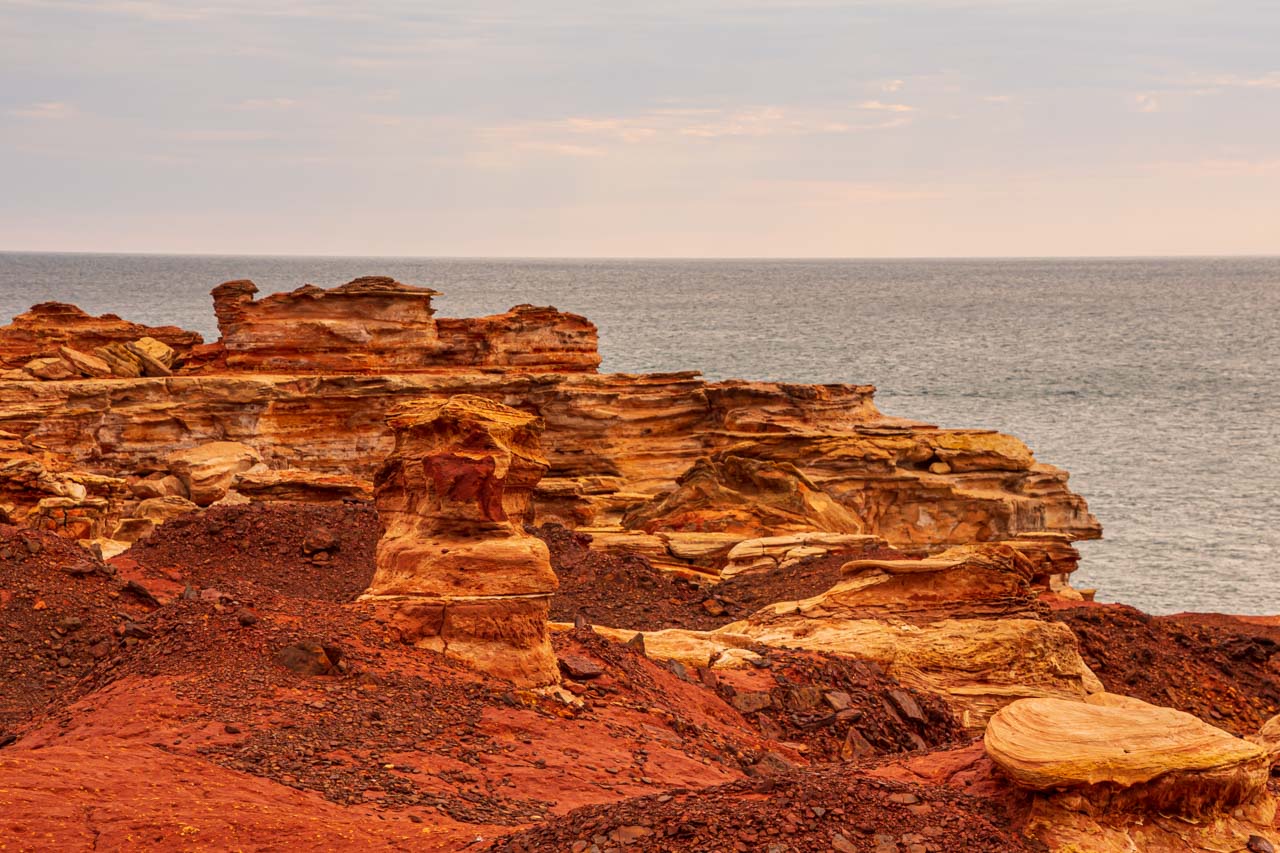 Gantheaume Point is at the southern end of Cable Beach, six kilometres from Broome’s town centre. If you don’t have a car, a tour could be your best option for viewing Gantheaume Point’s vibrant red rock formations that drop down to the Indian Ocean. 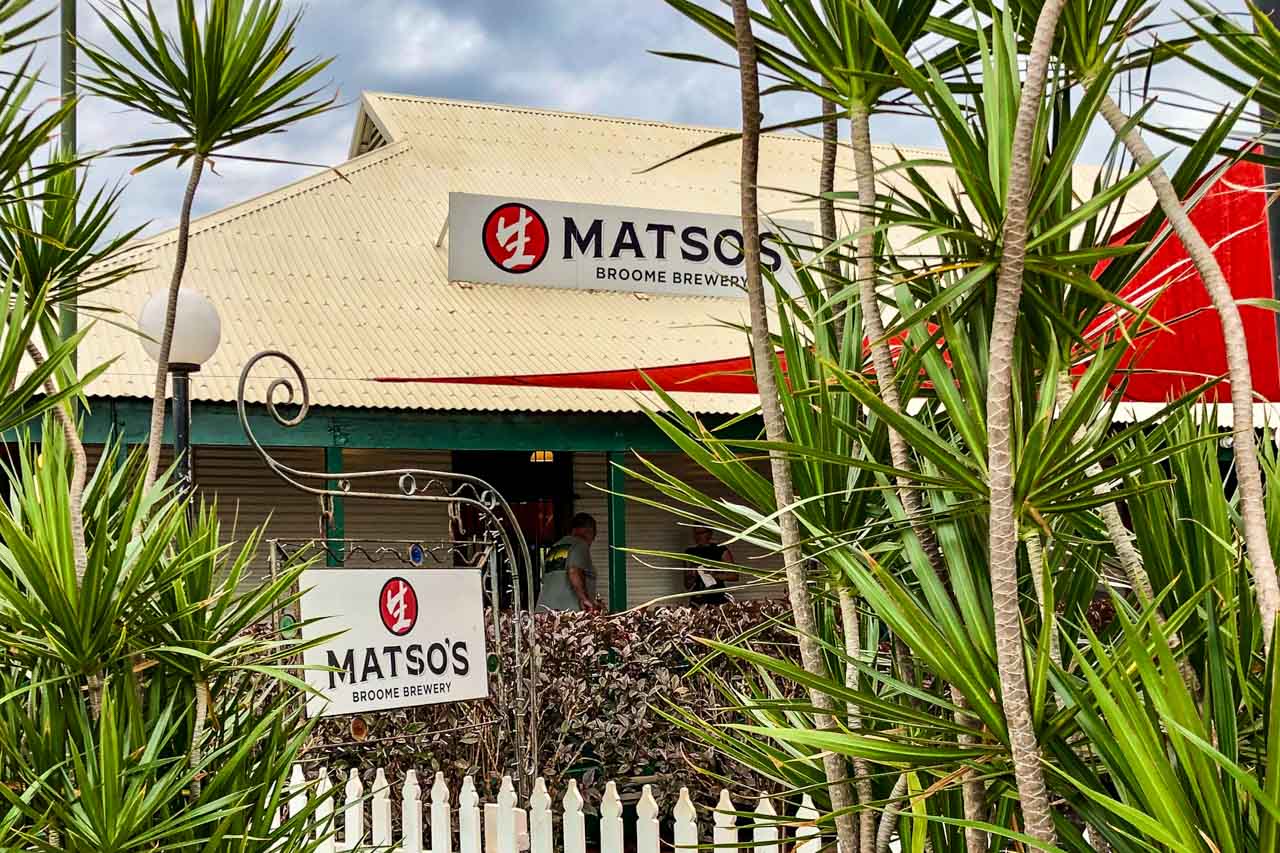 Stop in for a drink at Matso’s Broome Brewery on Roebuck Bay – Australia’s most remote microbrewery and the only brewery in Broome. Sample Matso’s famous alcoholic Ginger Beer or try their Mango Beer or Chilli Beer.

Breakfast, lunch, and dinner are available at this award-winning venue.

Also at Matso’s: Sobrane, the artist who painted the murals on the silos at Tungamah in North East Victoria, lives in Broome and has a gallery within Matso’s grounds. Her artwork is delightful and primarily focuses on Australian native birds. Take a wander through her gallery. 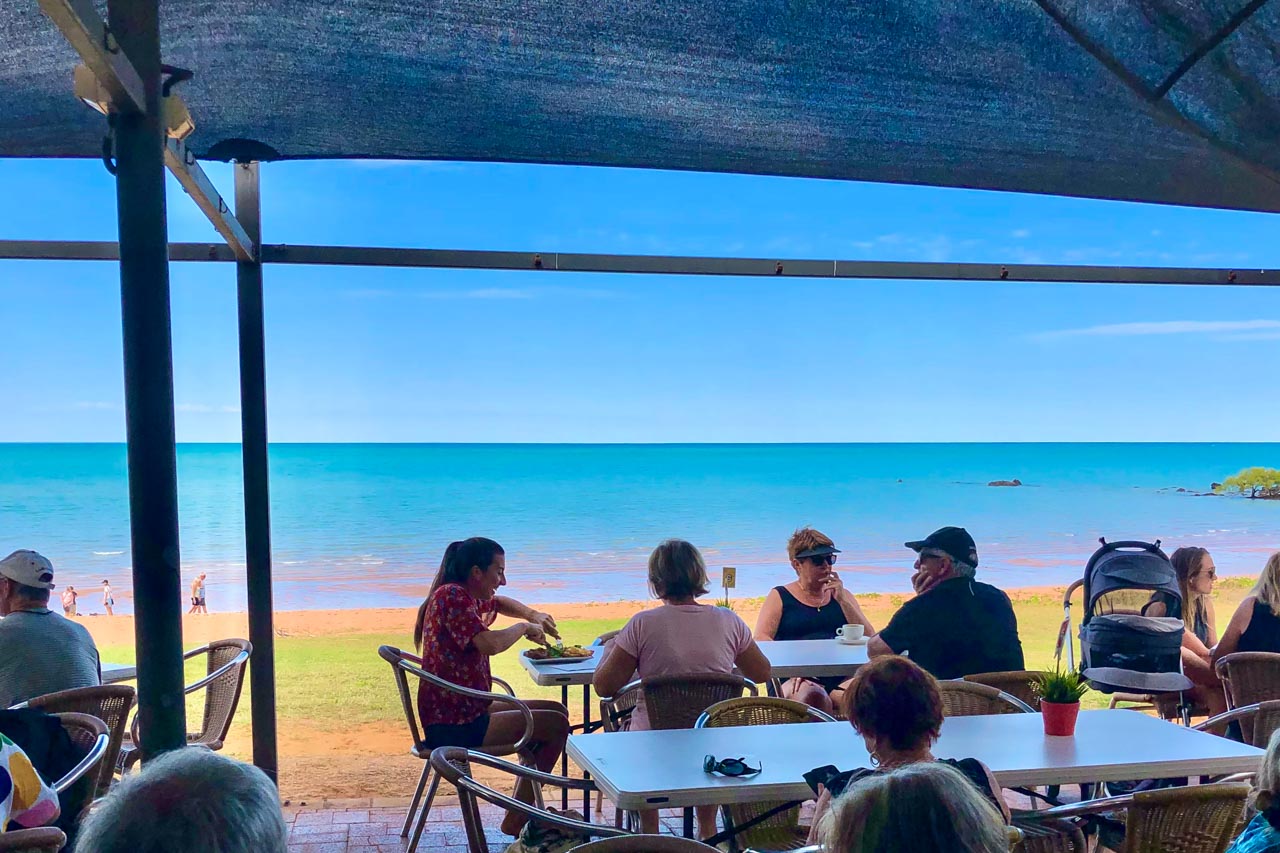 Town Beach Café has the best views in town. As the name suggests, the café is at Town Beach overlooking Roebuck Bay.

Broome is a bit short on cafés. However, Town Beach Café won me over with its beautiful view over the azure waters of Roebuck Bay and its excellent food. I ate here a couple of times for breakfast and brunch. My favourite meal was ‘Stacks on Shorty’ – fluffy pancakes, fresh bananas, syrup, berry compote, and mascarpone. Yum! It makes my mouth water just writing about it. An iced coffee completed my meal.

At the time of writing, Town Beach Café is closed for the wet season, reopening in March 2022. 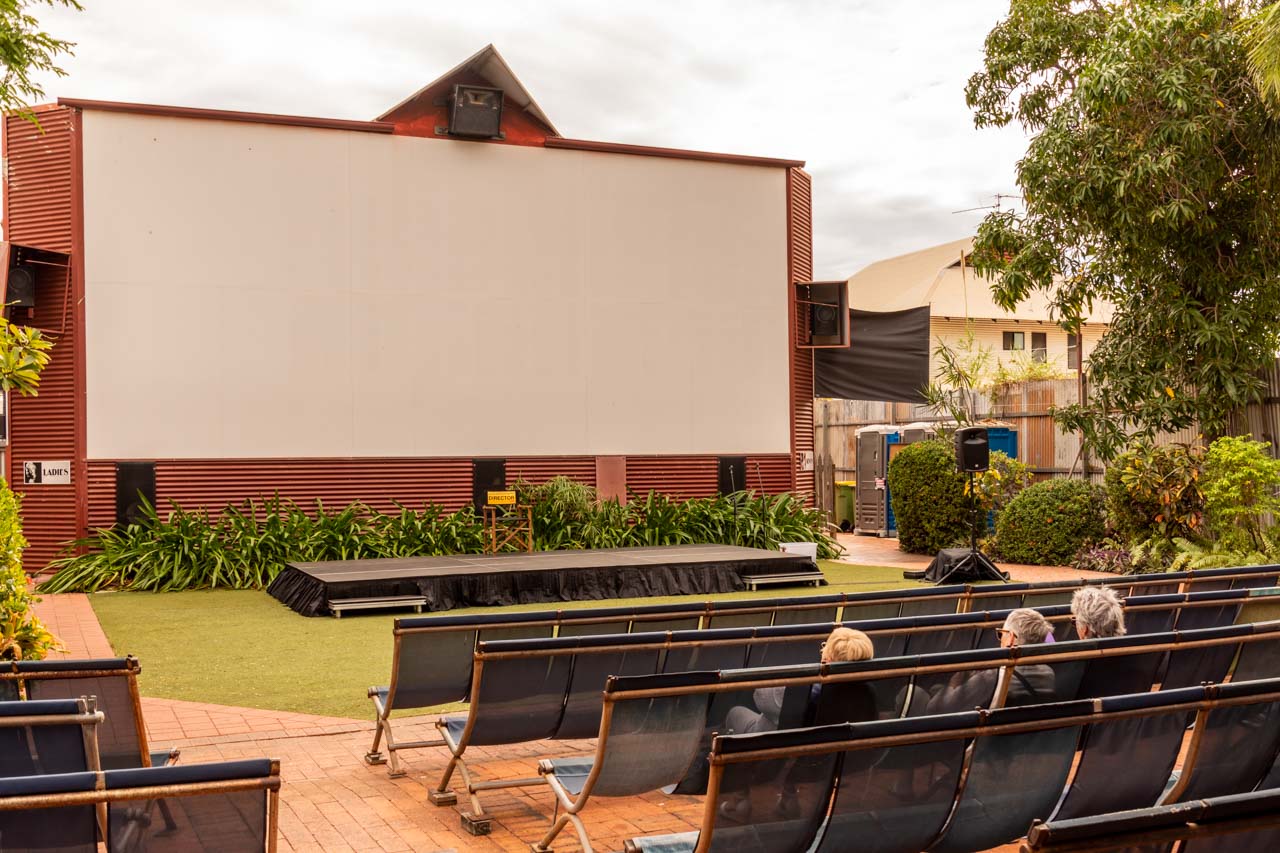 Sun Pictures is an outdoor cinema in Broome’s Chinatown. It is the world’s oldest operating open-air picture garden and is heritage listed (Western Australia).

Movies run nightly, but be warned, Sun Pictures is located under the airport’s flight path. It is not unusual for your movie to be interrupted by the sudden and loud noise of a plane flying over low enough to feel you can reach up and touch it.

Sun Pictures is a major tourist attraction. If you don’t want to see a movie but would like to check out the inside of the cinema, tours are available.

Fun fact: Sun Pictures is the only picture theatre in the world to be subject to continual tidal flooding. Until Broome’s levee bank was built in 1974, moviegoers would have to lift their feet as the tide came in. Rumour has it that you could catch a fish during a screening! 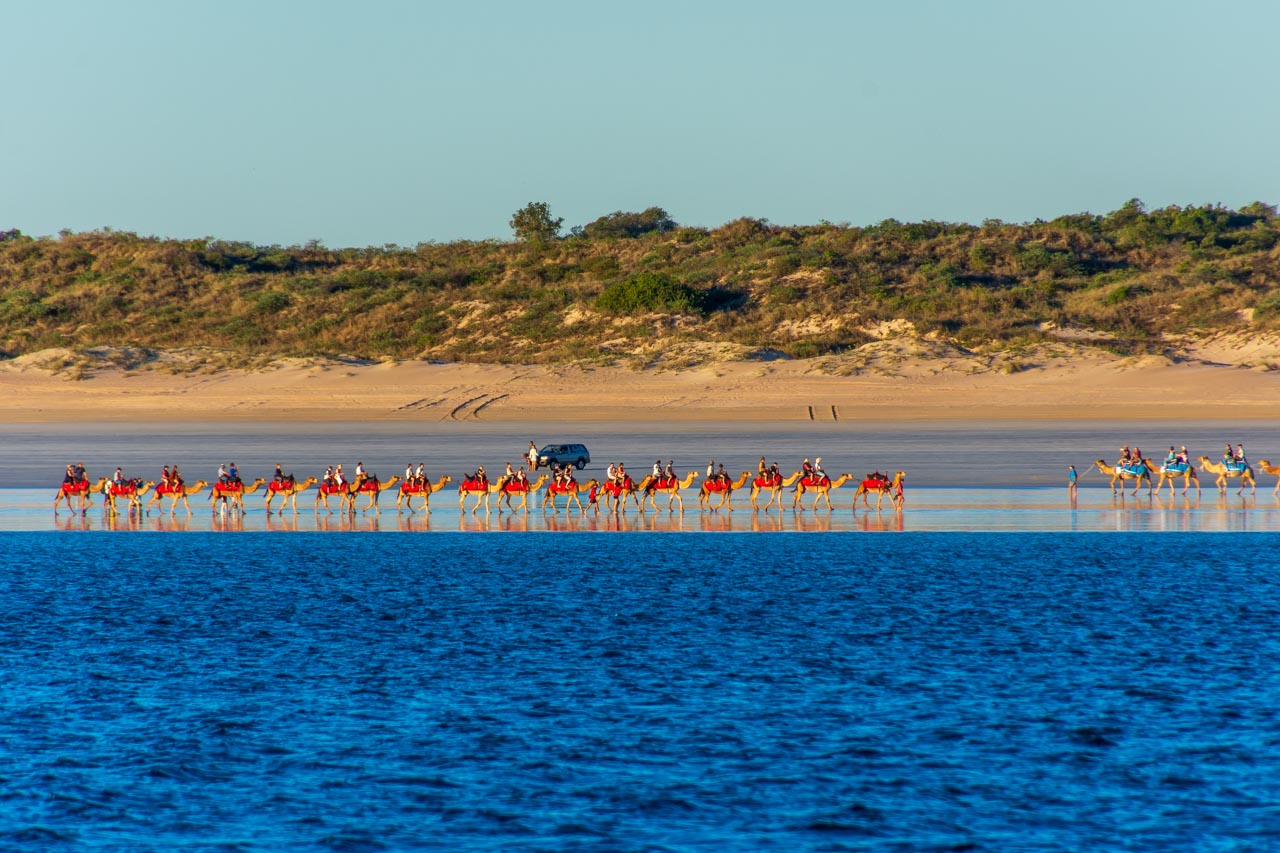 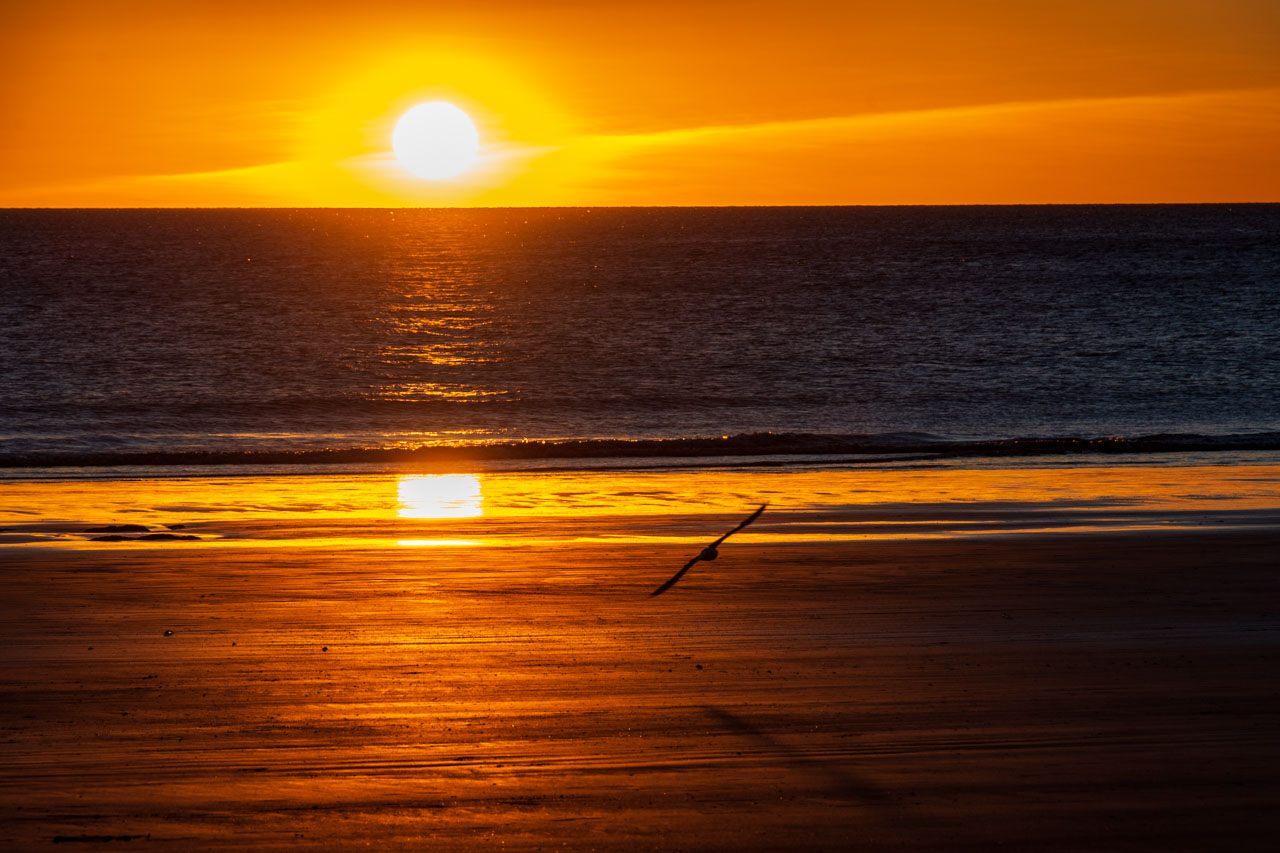 Visit Cable Beach to watch the spectacular sunset over the Indian Ocean. 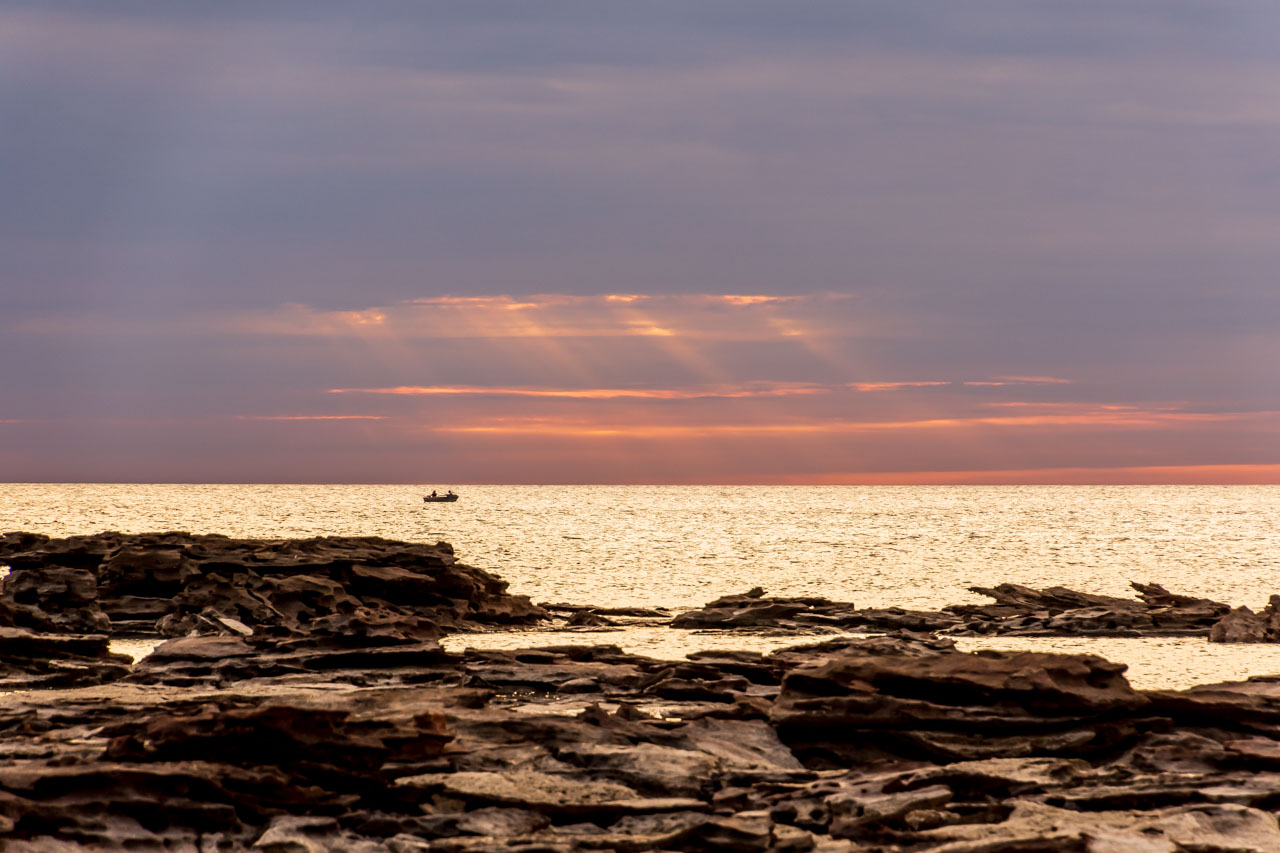 Gantheaume Point provides a less crowded alternative to Cable Beach for watching the sun drop below the horizon. With its rock formations, it also offers a different perspective from that of Cable Beach.

Unfortunately, on the evening of my sunset tour to Gantheaume Point, there was thick cloud cover. Even so, I found the sun escaping through the clouds to be visually pretty and quite different to that of Cable Beach’s lens-filling red.

Staircase to the Moon 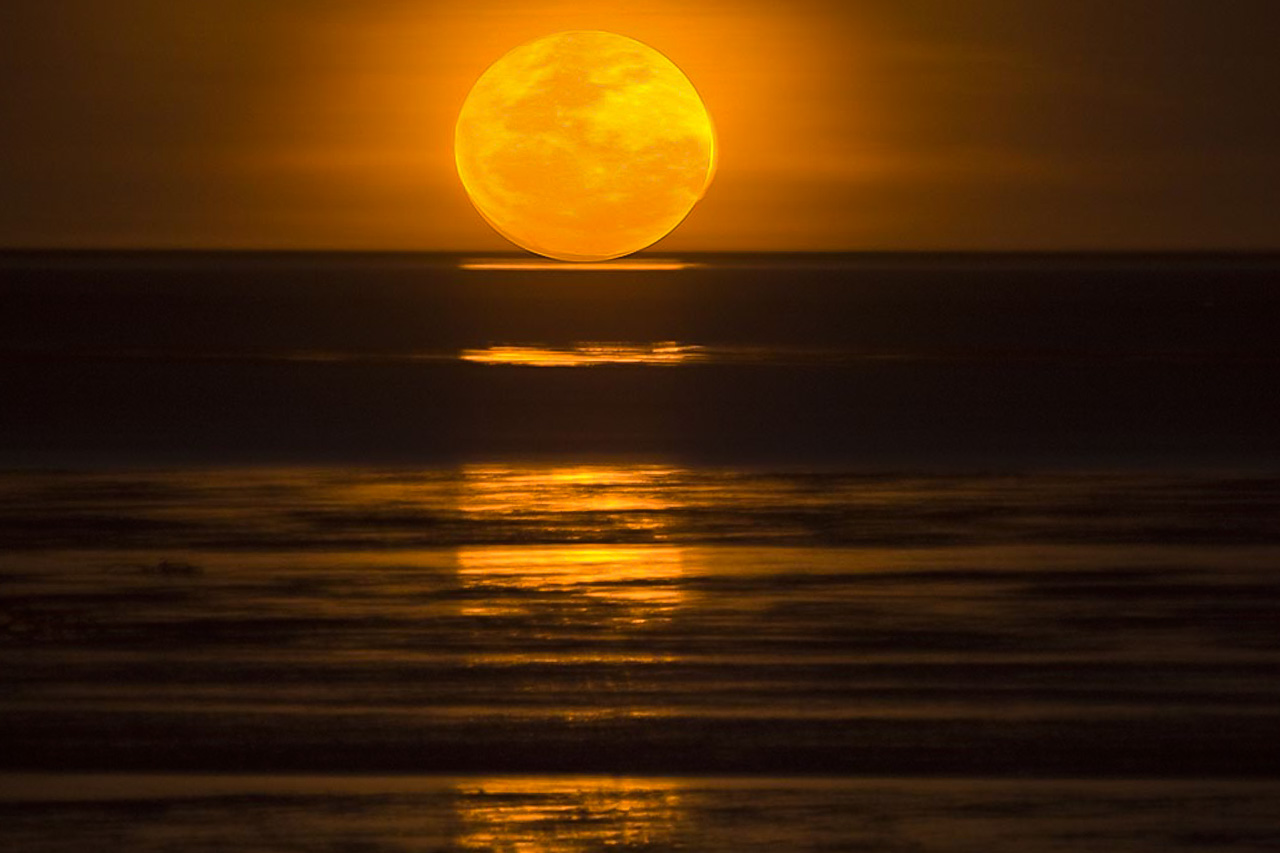 Staircase to the Moon is an optical illusion created by a natural phenomenon. This spectacular vision occurs when a rising full moon is reflected in the exposed mudflats of Roebuck Bay at extremely low tide. Thus, creating the illusion of a stairway reaching to the moon.

Dates and times to observe Staircase to the Moon are available from Broome Visitor Centre. 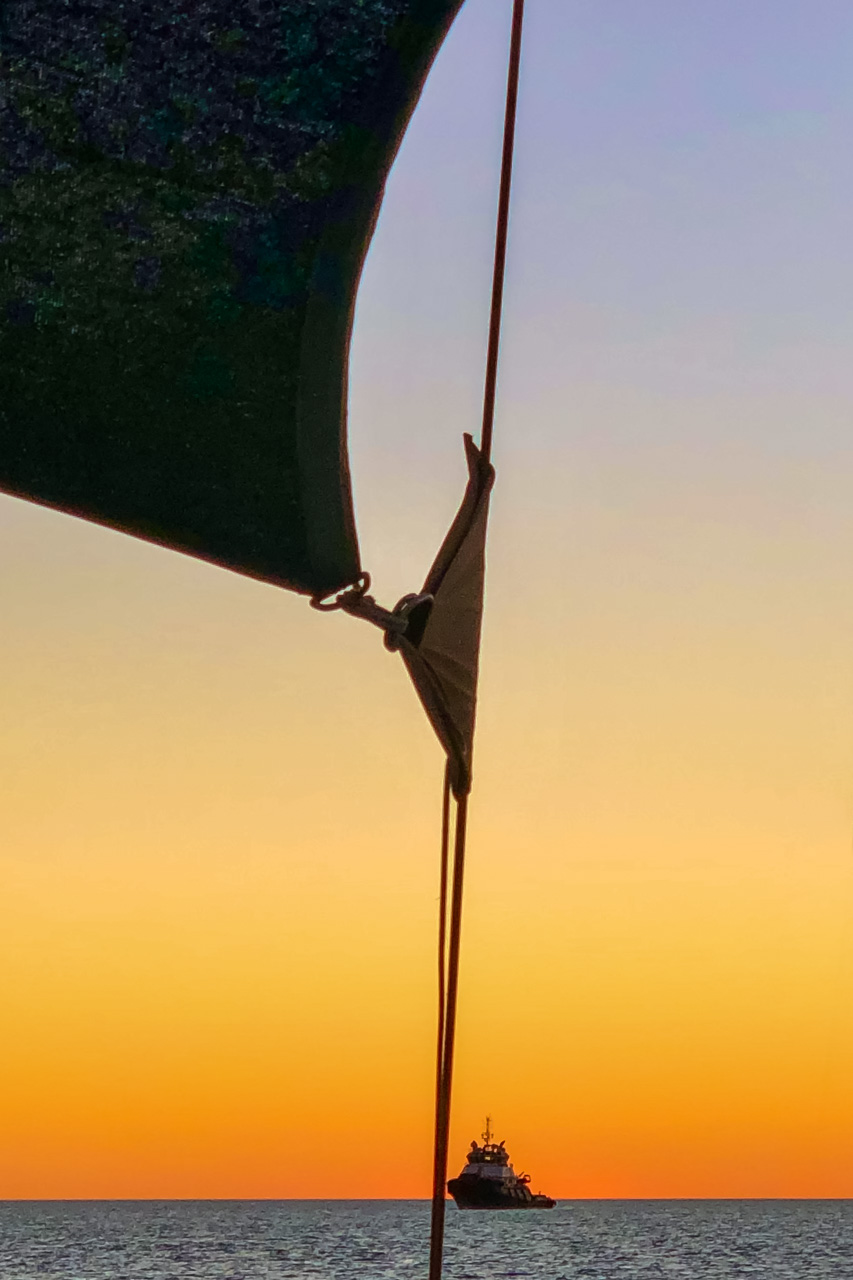 A sunset cruise along Western Australia’s coastline with the chance to see Humpback whales is a relaxing way to spend four hours in the late afternoon.

The cruise I took was on a catamaran with a fully licensed and serviced bar onboard. Fresh canapes, fruit, cheese platter and non-alcoholic drinks were complimentary. Unfortunately, no whales were sighted. 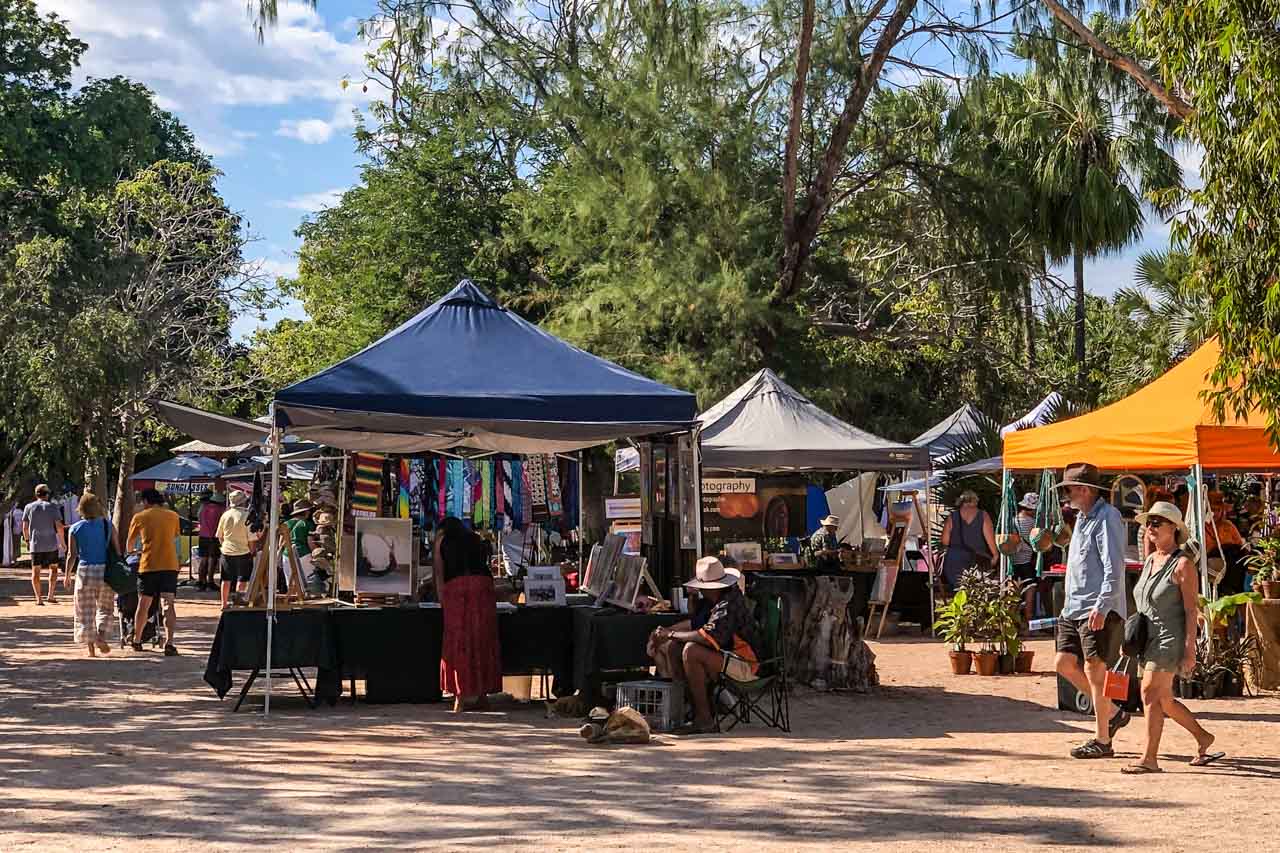 Hours: The Courthouse Markets run annually on Saturdays from 8 am – 1 pm and the same hours on Sundays between April and October. 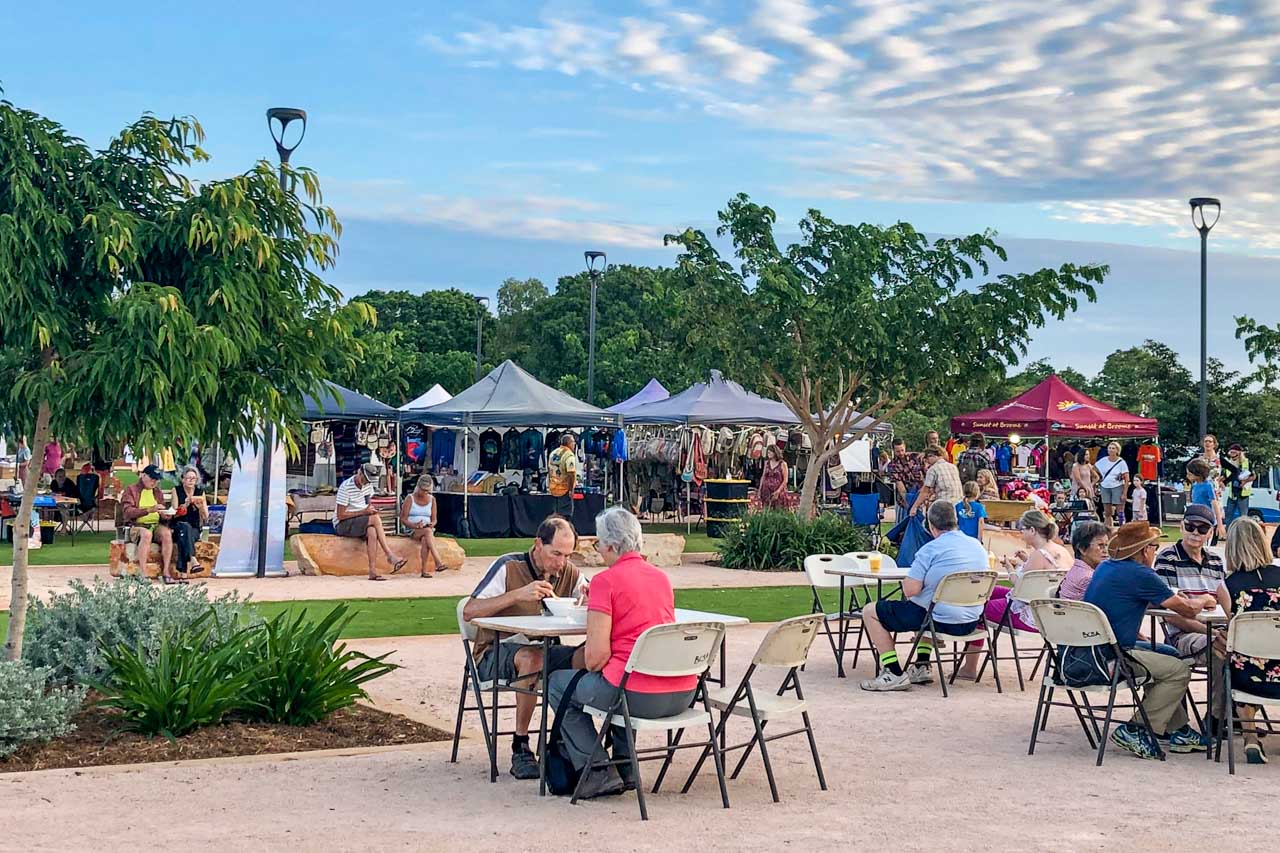 The Town Beach Night Markets are held every Thursday night (4 pm – 8 pm) from June to September. The markets are located at Town Beach Reserve on Hamersley Street.

The day I arrived in Broome (3rd June) was the first Town Beach Night Markets held for the season. I wandered around the various stallholders displaying a variety of crafts and wares, checked out the food vans offering international and local cuisine, and listened to live music while I ate my dinner.

Broome is flat and easy to walk around. When I wasn’t walking, I took the Broome Explorer Bus. The map and timetable are accessible online (and from the Visitor Centre and hotels). 24- and 72-hour passes are available online. I opted to purchase a single ticket on the bus for each trip I took. A single ticket (return tickets are not an option) costs $4.50 (adult) per trip for one to unlimited stops.

Take the time to visit Broome Visitor Centre at 1 Hamersley Street for all your travel needs: what to see and do, activities, tours, getting around Broome, and places to stay. I found the staff most helpful, friendly, knowledgeable, and willing to spend as much time with me as I needed. They suggested activities, booked tours for me, checked tours availability, and provided maps – all with a smile. In the Visitor Centre, you will find better quality souvenirs to take home.

I did buy myself a souvenir but not from Broome Visitor Centre. I purchased a traditional carved pearl shell (Riji) by indigenous Bardi elder and artist Bruce Wiggan. Each of Bruce’s carvings is unique and tells a story of culture through the red and ochre lines. My Riji is ‘Old People Teaching’. It is about the old people teaching the young ones the stories and traditions of making the raft (goolwa) – where to find the best mangrove wood and how to shape them. The outside lines depict the currents and tides best for riding. I bought the traditional carved pearl shell at Cygnet Bay Pearls in Broome’s Chinatown, 23 Dampier Terrace. 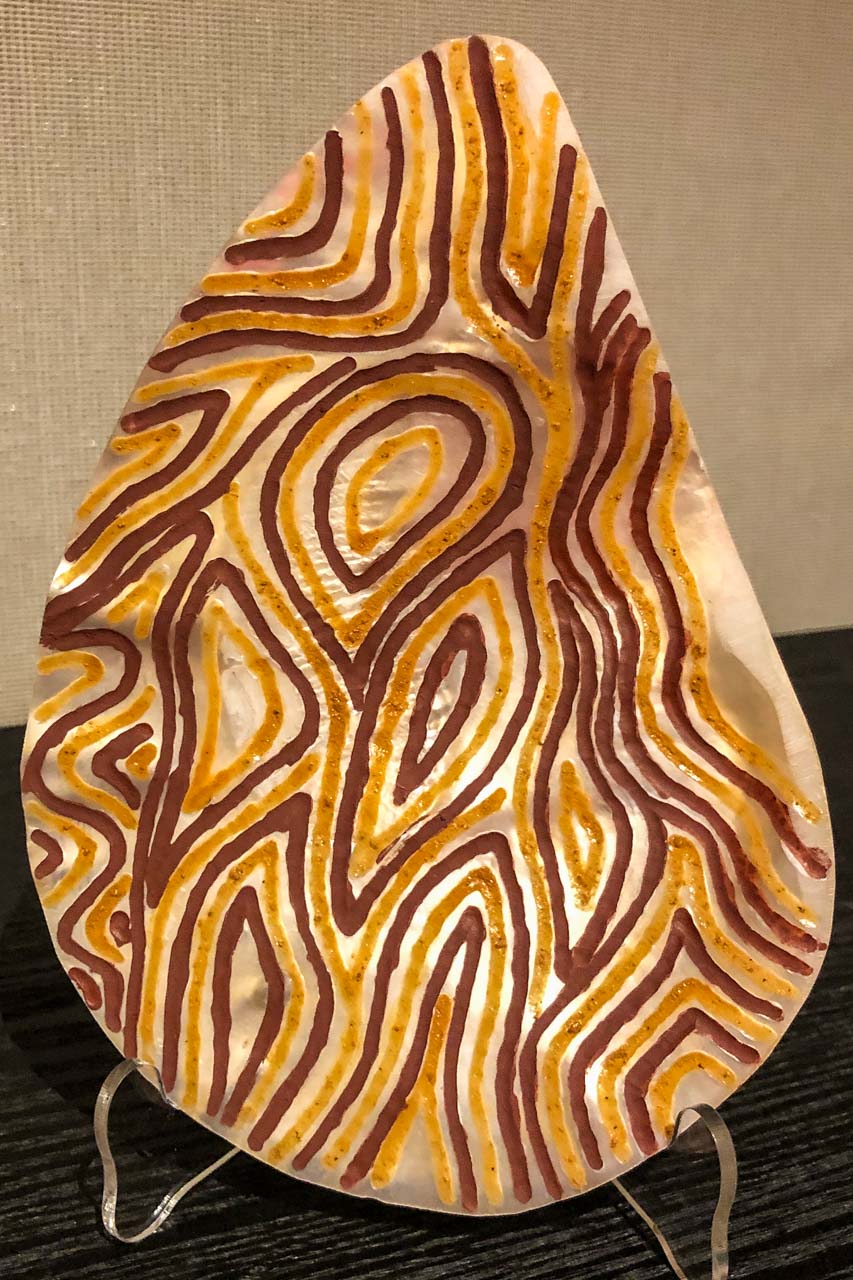 Broome has no summer or winter, just wet or dry due to its tropical monsoon climate. The wet season is November to April, and the dry season is May to October.

Disclaimer: This post contains no affiliate links. All views and opinions are my own and non-sponsored.  Unless expressly stated, all photos are my own and remain the copyright © of Just Me Travel 2021.

Have you been to Broome in the Kimberley, Western Australia? Which activities would you like to share with readers? If you haven’t visited Broome, is this a destination that tempts your wanderlust? If you only had time for one activity, which would that be? Please leave a comment below to share your thoughts.

To see more of the Kimberley:

The Ultimate Guide to 6 Safe Swimming Holes in the Kimberley, Australia

See 7 Beautiful Gorges in the Kimberley – the ultimate guide

END_OF_DOCUMENT_TOKEN_TO_BE_REPLACED
No Comments on 15 PHOTOS TO INSPIRE YOU TO VISIT BROOME, WESTERN AUSTRALIA
Joanna Rath
With a passion for photography and writing, Joanna has been solo travelling across the globe for the last 25 years. Follow her journeys, read her reviews and discover places to see on justme.travel